Barry Gibson, a veteran teacher and two-time graduate of The Southern Baptist Theological Seminary, is joining the faculty of Boyce College as the Associate Professor of Teacher Education, according to an announcement from R. Albert Mohler Jr., president of Southern Seminary.

The Southern Baptist Theological Seminary has hired J. Keith McKinley, a seasoned missionary and veteran of the International Mission Board to its faculty, announced President R. Albert Mohler Jr. today. McKinley has been involved with missions with the IMB for more than 20 years, and he joins the Billy Graham School of Missions, Evangelism and Ministry as Associate Professor of Christian Missions. McKinley comes from a rich family heritage of missions. His father, Jim McKinley, was an IMB missionary in Bangladesh for 34 years.

Southern Seminary adds Christian ethics and public theology scholar to its faculty May 29, 2019

Baptist scholar and ethicist Andrew Walker is joining the faculty of The Southern Baptist Theological Seminary, according to today’s announcement from President R. Albert Mohler Jr.

Matt Boswell, a widely respected hymn writer and leading figure in church music, is joining the faculty of The Southern Baptist Theological Seminary, President R. Albert Mohler Jr. announced today. Boswell, who is currently the founding pastor of the Trails Church in Prosper, Texas, will be assistant professor of church music and worship.

Graduates go out to invite the nations in, says Mohler at SBTS graduation May 17, 2019

The formal commissioning of hundreds for gospel service is not just a graduation. It is ultimately fulfillment of God’s promise to Jesus Christ that his house would be filled, said President R. Albert Mohler Jr. in his May 17 commencement address.

During the 223rd commencement exercises on the seminary lawn, 304 master’s and doctoral students graduated from Southern Seminary. The ceremony, according to Mohler, is not just a ceremony to honor them. It is a worship service for the God who called them and prepared them for ministry.

Mohler to Boyce graduates: Ministry preparation has eternal implications May 10, 2019

A degree from Boyce College represents an eternal investment, said R. Albert Mohler Jr., president of The Southern Baptist Theological Seminary, during the 21st commencement ceremony of Boyce College, May 10. During the ceremony in Alumni Memorial Chapel, 140 students were present to receive degrees as part of a 177-person graduating class, one of the largest in the school’s history. 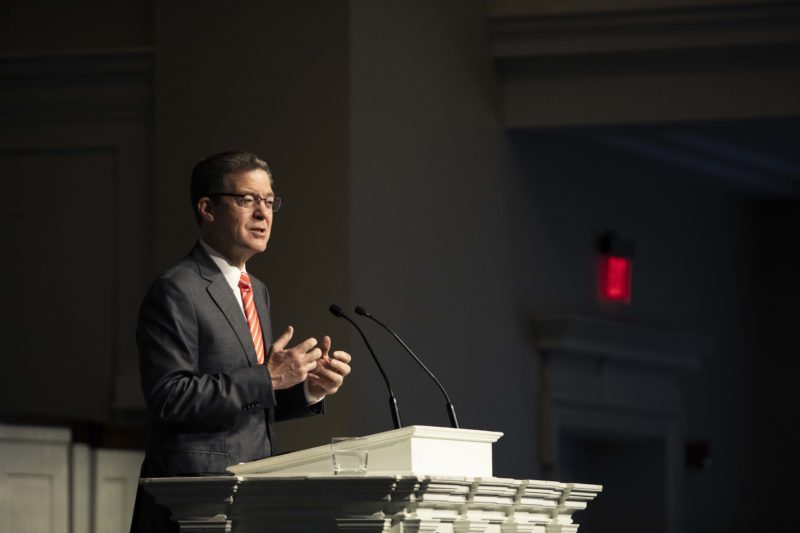 Samuel D. Brownback, Ambassador at Large for International Religious Freedom, encouraged students at Southern Seminary to participate in a “grassroots movement” to make religious freedom a priority in Louisville, Kentucky, and around the world. He argued this during the Duke K. McCall Leadership Lecture in Alumni Memorial Chapel, April 25.

“My main goal today is to encourage and even recruit some of you as advocates for religious freedom — an essential, God-given human right declaring that everyone, whatever their faith might be, has the freedom to live according to their own conscience.”

Greenway was previously dean of the Billy Graham School of Missions, Evangelism and Ministry at Southern Seminary, and Stinson was provost and senior vice president for academic administration. Mohler called their elections a “moment of pride” for Southern Seminary.

At spring board meeting, Mohler announces three new administrators, urges faithful teaching of the next generation; Board approves an increased budget April 16, 2019

Albert Mohler Jr. announced three new appointments to the administration of The Southern Baptist Theological Seminary during the plenary session of the spring meeting of the Board of Trustees Monday night. Matthew J. Hall is the new provost and senior vice president for academic administration, Paul Akin is the new dean of the Billy Graham School for Missions, Evangelism and Ministry, and Dustin Bruce is the new dean of Boyce College, the undergraduate school of Southern Seminary.