One Year Later, Mayfield Coming Back after Devastating Tornado

Until Jesus returns, December 10, 2021, will live in infamy for citizens of Mayfield, Kentucky. 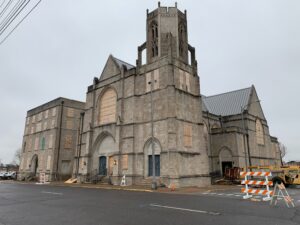 That night, “the Beast” tore through town.

Just before 9:30 that evening, one of the strongest tornadoes to hit the United States in the past decade—a storm so ferocious it moved one National Weather meteorologist to nickname it “the Beast”—roared through the center of downtown Mayfield. What the nocturnal beast left in its wake was hard to fathom: 1,300 homes and businesses severely damaged or completely destroyed, nine late-shift workers killed at a candle factory on the outskirts of Mayfield and 24 total killed in Mayfield/Graves County.

Within about a 90-minute span, the marauding twister obliterated the city of Mayfield and then smashed through smaller western Kentucky towns of Benton, Princeton, Dawson Springs (site of 14 deaths), and Bremen. Its winds reached nearly 200 mph, the surreal damage left behind ranked the tornado at an EF4 on the Enhanced Fujita Scale. All told, “the Beast,” spent more than three hours on the ground, traveled 165 miles, and took 58 lives.

Wes Fowler, pastor of First Baptist Church of Mayfield, hunkered down with his family and another staff member in the church as the storm leveled his hometown and his home church. You may read his account here.

In the days following, Fowler—a 2015 DMin graduate from SBTS and current PhD student—helped his church and community dig out of the rubble. Fowler and his church also became the epicenter for communicating Mayfield’s tragic story to the world as numerous media outlets from the New York Times to CNN’s Anderson Cooper interviewed him.

The historic First Baptist Church building sustained heavy damage but was one of the few buildings left even partially standing in downtown Mayfield. Fowler grew up in Mayfield and has served as pastor of FBC since 2011.

The church’s facilities are still being repaired with quite a way left to completion, a testimony to the extent of damage.

“We are making progress every day with rebuilding our campus, but a project of this magnitude takes significant time,” Fowler said. “Thankfully, the exterior of our campus survived, but due to severe roof damage, every square foot of the interior needs renovation.  And, since our campus is almost 100,000 square feet, it’s quite an undertaking!

“If all goes well, we are hoping to be back in our sanctuary by late summer or early fall, 2023.  The remainder of our campus will likely take an additional year-and-a-half to renovate. So, from the date of the tornado to completion, our renovation will be a three-year process.”

Then there’s his hometown where hardly a single building was left unscathed. More than 1,300 businesses, homes, and churches were completely demolished. In approximately the time it takes to read the first half of this article, the hometown Fowler had known his whole life was more or less erased.

With 12 months now passed since that deadly night, the rebuild is progressing steadily.

“As a community, Mayfield is making great progress and recovering well,” Fowler said. “Most of the demolition work is complete, and both individuals and businesses are beginning to rebuild.  Committees meet on a regular basis to plan the future layout and design of downtown Mayfield, and the plan is coming along well. We still have a long journey ahead of us, but much has been accomplished.”

There remain scars that cannot be seen with the human eye. For years to come, every time meteorologists use the words “tornado threat” and “western Kentucky” in the same phrase, anxiety will no doubt bubble up in the hearts and minds of Mayfield’s citizens.

Fowler, who was named SBTS distinguished alumni last June in Anaheim, said the events have made him more vigilant about the weather.

While FBC Mayfield’s building sustained heavy damage, the church itself continues on in strength, Fowler said, adding that he has learned some important lessons about ministry in wake of the devastation.

“In the past year, I’ve learned a great deal about the church and about ministry,” he said. “I’ve always preached that followers of Jesus are the church and the building is simply where we meet.  It’s one thing, though, to preach this truth; it’s quite another to actually live it.

“For worship, we meet in a borrowed theater.  For Sunday school, we meet in homes and businesses all across Mayfield.  For children’s and youth activities, we rent space on a weekly basis.  Piece by piece we intentionally make it a priority to gather, fellowship, worship, and hear from God’s Word.  From experience, we are learning that the body of Christ is indeed the Church.  The building is nice, but it’s a poor substitute for the church.”

Help and helpers descended Mayfield from 42 states and media trucks were a constant presence in the weeks following the storm. But one year later, the media has moved on and the help has thinned out a good bit. But the Lord used that media coverage, Fowler said, to bring desperately needed help and resources to Mayfield and the surrounding area.

“For several weeks following the tornado we had regular interaction with various forms of media,” he said. “For me, the interactions were positive and provided a great platform to share the Gospel and speak of the kindness and graciousness of God.

“Now, as we approach the one-year anniversary, several media outlets have returned to Mayfield, and I believe most in our community welcome them with open arms. In my opinion, the initial media coverage of Mayfield significantly increased awareness of our needs, which in turn impacted the level of support from around the country.”

Stories of Christlike faithfulness emerged after the storm. Remarkably, several staff members from Samaritan’s Purse moved to Mayfield and still serve the community on a full-time basis.

Said Fowler, “As part of their recovery plan, Samaritan’s Purse purchased a large tract of land and they are currently building 60 homes for our community. It’s a massive project provided for Mayfield as a gift. How do you say ‘thank you’ when a ministry donates an entire neighborhood?  I’m really not sure, but I know we are incredibly appreciative of their generosity.”

Over the past year, there have been enhanced opportunities for gospel ministry due to the magnitude of the physical needs. The church meets the people’s physical needs while also seeking to meet the deepest need of human hearts. Ultimately, eternal needs are always the focus.

“In the process of meeting those needs, relationships were formed.  Then, in the context of a relationship, trust was built.  When trust exists, spiritual needs can be addressed more easily.  I believe we are called to proclaim the gospel in all contexts, but I’ve witnessed the effectiveness of meeting physical needs with the ultimate hope of addressing one’s most urgent need.”