In her first year as Boyce Volleyball Head Coach, Jackie Wells won the Division II Mideast Region Coach of the Year award. Wells and the Bulldogs will compete in the program’s first national tournament this Thursday in Kissimmee, Florida. 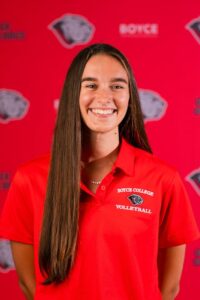 “I am humbled and thankful,” Wells said. “This award is a testament to the accomplishments of the entire Boyce Volleyball Program and the years of dedication from the coaches and players who have poured into it over the past seven seasons.”

Wells led the Bulldogs to their best season yet, earning a number one seed in the Mideast Regional Tournament—where they lost a close match to Welch College in the championship.

Dustin Bruce, Dean of Boyce College, is proud of the team’s success.

“The Boyce Bulldogs volleyball team has modeled the disciplined pursuit of excellence we encourage our students to pursue in every area of life,” Bruce said. “We could not be more proud of their accomplishments this year and wish them well as they compete in the national tournament.”

Michael McCarty, Director of Athletics for Boyce, is thrilled at Wells’ immediate achievements on and off the court.

“Coach Wells has continued to grow our program and has done a fantastic job leading these young ladies in volleyball—but more importantly, spiritually and academically,” McCarty said. “Coach Wells deserves the Mideast Coach of the Year award as she has helped lead the volleyball team to their first winning record in team history, first one-seed at the NCCAA regional tournament, and first National tournament berth since the program launched in 2016.”

The Coach of the Year award and the Bulldog’s winning season continues a pattern of accomplishments for Wells. Attending Arlington Baptist University, she helped her team win two NCCAA DII Regional Championships and qualify for three National Championship tournaments. She was recognized as a scholar-athlete and four-time All-American by the NCCAA. In her junior and senior seasons, she won Region MVP and was named to the National All-Tournament Team.

After graduating from Arlington Baptist University, Wells moved to Louisville in 2020 to attend Southern and is currently pursuing an MA in Biblical Counseling.

“Regardless of our results in the National Tournament, I will finish out this season as a proud coach of truly amazing athletes,” Wells said. “I am thankful to play a small role in the growth of our athletic program and to represent Boyce College from the sidelines, and I am praying for the Lord to be glorified in the seasons to come."

The Bulldogs will face Bob Jones University in the NCCAA Division II National Tournament this Thursday at 3:30 p.m. in Kissimmee, Florida.

If you are interested in participating on the Boyce Volleyball team please fill out the recruit me form and contact Coach Wells directly at boycevolleyball@sbts.edu.