“All Preaching Is Persuasion,” Helm Says in Annual Mullins Lectures

A faithful preacher’s role is to move from exegesis to persuasive exposition, to communicate biblical truth with clarity, and to bring credibility as a godly man to the pulpit, David Helm told attendees of the 2022 E.Y. Mullins Lectures, held October 26–27 at Southern Seminary. 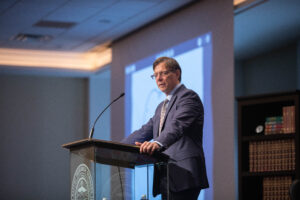 The theme of the Mullins lectures was “Persuasive Preaching.” Helm also serves as board chairman for the Charles Simeon Trust, a ministry that encourages expository preaching and conducts preaching workshops worldwide.

“The preacher, in his preparation, is always moving from the biblical text to presenting what he has learned,” Helm said. “Only after the hard work of exegesis and theological reasoning can the preacher turn to having a word for today.”

Helm said all sermons should make an argument to persuade. The preacher isn’t simply presenting information but is calling for an obedient response. To provoke a response, however, the sermon must present a persuasive argument that is clear and rational.

“Preachers should fashion an argument that will lead the listener to a point of determination and act of the will. You must make an argument,” Helm said. “Christianity is not meant to just state things or be part of the conversation. We are actually trying to persuade people. Persuasion requires making a reasonable, accessible, and delightful argument.”

“Your job isn’t to recapitulate everything you learned in your study,” Helm said. “You don’t make arguments up—you take arguments up. Your text has already made an argument to the first readers and your sermon must shape that argument for your listeners.”

Faithful preachers must also arrange their sermons in a way that is easy for hearers to follow with a clear introduction, main portion, and conclusion, Helm said. The introduction and conclusion should take up about 10 percent each of the sermon, while the main body should occupy at least 80 percent of the preacher’s time, he said.

“Arrangement is best done when the outline mirrors the organization of the text,” he said. “The persuasive preacher intentionally arranges his sermon to make an argument.”

Helm’s final lecture dealt with the preacher’s ethos, which he defined as “the indispensable attribute of credibility. When your hearers have bestowed on you credibility—they believe you.”

The persuasive preacher must cultivate credibility both in his person and in his preaching—his godly character and his sermon content, Helm said. Humility and godliness are foundational and non-negotiable for credibility in preaching. A preacher establishes credibility by demonstrating genuine humility in both his character and delivery.

Godly living and humility adorn the preacher with a clear conscience which becomes evident in his preaching, Helm said, referencing Paul’s advice to young Timothy in 1 Timothy 4:16: “Keep a close watch on yourself and on the teaching. Persist in this, for by so doing you will save both yourself and your hearers.”

“If you forfeit your conscience,” Helm said, “you forfeit the internal characteristic of credibility.”