Fall Trustees Meeting: Board Commends Mohler’s Stance on Meaning of Pastor in BF&M 2000

At their annual fall board meeting Monday, trustees at the Southern Baptist Theological Seminary unanimously adopted a resolution commending the public stance seminary President Albert Mohler took on the office of a pastor during the 2022 SBC annual meeting in Anaheim. 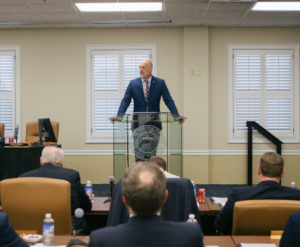 In June, Messengers at the SBC’s annual meeting in Anaheim, CA, considered precisely what the Baptist Faith & Message 2000 means when it refers to the office of a pastor. Mohler argued that the SBC’s confession of faith unequivocally reserves the office, function, and title of pastor to biblically qualified men.

Mohler served on the committee that drafted the BF&M 2000. On the convention floor in June, Mohler told messengers that there was no debate or confusion among BF&M 2000 committee members as to what is meant by the term “pastor:” it is an office which Scripture defines clearly in terms of qualifications and limits to men.

The trustees’ resolution commends Mohler’s stance. It concludes: “It is further resolved that this Board encourages The Southern Baptist Theological Seminary administration and faculty to continue its theological training with this stated conviction—graduating both men and women for service to the church, but with men alone reserved for the office and function, and thereby title of pastor.”

With reference to Ephesians 3:20, Mohler said, “An awful lot of what the Lord has given us is that for which we didn’t even know to ask.” He added: “When it comes to blessing us, God is able to do far more abundantly than all we ask or think. That’s our experience, and I want to thank the Lord for us, our students, our faculty, and you (trustees) for giving us far more than we can ask or think.”

In other business, trustees approved the seminary’s audit report for the past fiscal year, showing the school’s strength and marking yet another year with no recommendations from the auditor.

Board members gathered on Tuesday for a lunch honoring the 25th anniversary of the Seminary Wives Institute, a program that has offered preparation and academic training for seminary wives as they anticipate years of service as wives of pastors and other ministers. The program leads to academic certificates, is led by faculty wives, who volunteer their time, and is taught by seminary professors, who also teach in the SWI program without compensation so that costs to students can be kept to a minimum.

On behalf of the Board of Trustees, Jodi Ware, an instructor in the Seminary Wives Institute (and wife of Professor Bruce Ware), made a presentation to Mary Mohler, who founded the program and has led it for a quarter century.

“Seminary Wives Institute is a marvelous work of God for which we give him great praise,” said Jodi Ware, speaking as faculty wife and longtime SWI teacher. “But humanly speaking, SWI would not exist without Mary Mohler. She is the energizer, policy maker, curriculum planner, faculty encourager, prayer warrior, and overall facilitator of everything in the SWI program.

“I’m confident that God sees all your labor, Mary, and commends you for it. And we all say, ‘Thank you.’”