Dignity Is the Missing Mark of Modern Leadership, Mohler Says at Leadership Briefing 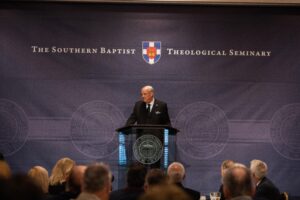 In this year’s Leadership Briefing, Mohler examined the life and leadership of the recently deceased Queen Elizabeth II. The Queen served as England’s monarch for 70 years and died on September 8 at age 96. In his address, titled “The Mandate of Dignity: Queen Elizabeth II and the Missing Element of Modern Leadership,” Mohler held up Elizabeth as a leader whose lengthy reign exemplifies unwavering dignity at the highest level of leadership.

Queen Elizabeth’s state funeral was one of the most highly watched events in history, drawing the undivided attention of Americans whose country is founded upon the rejection of the English monarchy in favor of a constitutional republic. Yet, Americans are fascinated by the English monarchy as evidenced by the massive number of people in the U.S. who mourned the queen’s passing and watched her funeral with rapt attention.

“Something seems to be missing from our national experience that is present in the British system,” Mohler said. “Why are Americans drawn to the British crown? I would argue that there’s a particular reason.”

Mohler drew on The English Constitution, a book written in 1867 by English businessman and journalist Walter Bagehot, which examines a distinction in Britain’s government between the “efficient” part and the “dignified” part. The efficient part makes policy and manages the day-to-day machinery of government; the dignified part provides what Mohler called the “spectacle” or visual—an appropriate sense of stateliness intrinsic to royalty, but a part that should characterize all leaders. In England, Parliament represents the efficient part, the crown the dignified part.

“She seems to have believed that God put her on earth, in his providence, for her to be the queen of England to provide stability for as long as she would live—stability and legitimacy. When she spoke of her life—whether short or long—being lived in service to the British people, she didn’t mean as a field nurse in the army; she meant as the embodiment of the nation. Queen Elizabeth II embodied this dignified part.”

Mohler pointed out that Queen Elizabeth II was also a sincere follower of Christ who spoke often of her faith. Elizabeth came to the throne a few years after King Edward VIII who had failed morally and ultimately abdicated. Elizabeth viewed reestablishing moral credibility to the monarchy as central to her service on England’s throne.

Mohler cited examples of other leaders from recent history who, like Queen Elizabeth II, embodied the dignified element in leadership, particularly during seasons of national and international adversity: President Franklin Delano Roosevelt and his guidance of the U.S. during World War II, former United Kingdom Prime Minister Margaret Thatcher during the Falklands War, and Ronald Reagan throughout his two terms as U.S. president.

“Ronald Reagan represented that dignified part,” Mohler said, “whether it was the (Space Shuttle) Challenger disaster or any number of other events, including what became the end of the Cold War.

“American leadership and political leadership in our time has often come down to the right combination of the dignified and the efficient. No British monarch could have stood there in Berlin and looked into the camera and said, ‘Mr. Gorbachev, tear down that wall.’ That took someone who understood the dignified part. Ronald Reagan carried off the dignified part, but he was also commander-in-chief of the most powerful armed forces in the world and those who heard him say that in Berlin understood that.”

Dignity in leadership is scarce today, Mohler said, but it is an attribute that must be recovered for a nation or organization truly to flourish.

“The dignified part requires dignity,” Mohler said. “It’s difficult to imagine how it may be recovered. But then again, it must be recovered.”