Baptism is not merely a ceremony, but a critical event in the Christian life that teaches important theological lessons for daily living, SBC President Bart Barber said Thursday in chapel at Southern Seminary. 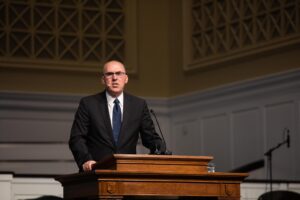 Preaching from Romans 6:1-7, Barber said Paul intended for believers to think deeply and reflectively on their baptism as it points to the death of the old man and the new life has come to a Christian through faith in Christ. Barber has been pastor of First Baptist Church of Farmersville, Texas, since 1999 and is serving his first term of SBC president, having been elected at the annual meeting last June in Anaheim.

“Your baptism is supposed to teach you something,” Barber said. “You’re supposed to study and learn from it deep truths that guide you from your birth as a disciple throughout your life as a disciple.”

Baptism is a picture of death and burial, Barber pointed out, an illustration of a Christian’s dying to sin. Just as Jesus died at Calvary, so is the old man in the Christian nailed to the cross. Thus, the believer has died to sin, Barber said.

The sinful person is pictured as dying in baptism, but the new person in Christ is depicted as being raised from the dead. This is a vital lesson, Barber said, because the old sinful man has died, and the believer has been raised spiritually to walk in newness of life.

“It is only those who have died who can be resurrected,” he said.

Because of Christ’s death and resurrection, as illustrated in baptism, the Christian is liberated from bondage to sin. Conversion to Christ destroys our enslavement to sin, he said. 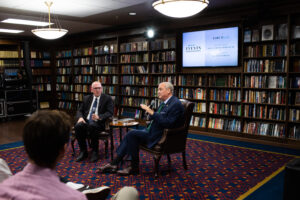 “Because of death and resurrection, it teaches us about freedom,” Barber said. “The destructiveness of conversion and the destructiveness of baptism is designed to remove the scar tissue from the fall of mankind and of my own transgression so that I might be liberated to walk in the manner that God designed me to walk.”

Only those whose hearts have been changed by God’s regenerating grace are able to learn such profound lessons from baptism, he said.

“It’s helpful for us to remember that we as Baptists favor the baptism by immersion of believers because only those who have been bought by the blood of Christ and quickened to life by the Holy Spirit are in any position to learn anything from their baptism.

“It’s true that our sins are many and his mercy is more, but so is the power he gives you to be free from bondage to sin.”

Barber also spoke to students during an afternoon forum and met with the faculty.