While many Christians wonder how the Old Testament remains relevant, believers should study, teach, and preach it because it is God’s Word and is vital for the Christian life, professor T. J. Betts urged in Southern Seminary’s annual Faculty Address held August 31 in Broadus Chapel. 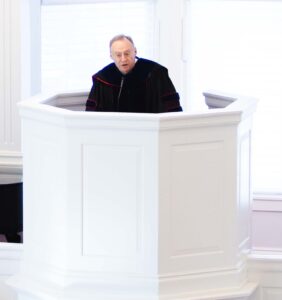 “My hope is for my students to see the treasure that is the Old Testament and experience the joy of teaching and preaching it,” Betts said. “There’s one God, one Savior, one Bible, and one faith. The Old and New Testament testify to this truth.”

1. The Old Testament is the Word of God.

All Scripture is breathed out by God and carries divine authority. Betts noted that Jesus and the New Testament authors expanded on—rather than replacing—the inspired message of the law and prophets.

“The unbroken testimony of the apostles is that the books of both testaments are special revelation in their entirety—the inspired word of God,” he said.

2. The Old Testament is God’s revelation of himself.

From cover to cover, the Bible teaches that God wants us to know him through his Word, Betts pointed out.

“Before Jesus was born and the New Testament was written, God had already revealed that he is a God committed to making himself known through his words and actions as revealed in the Old Testament,” Betts said.

3. The Old Testament speaks of and anticipates the Lord Jesus Christ.

Jesus is the substance and center of the whole Old Testament. The motif of fall, judgment, and restoration come to an eschatological climax when they will be executed by the Lord Jesus Christ, Betts said.

“The work of new creation makes little sense apart from Old Testament texts that lay the foundation for understanding the person and work of the Messiah—God stressed the need for a savior and promised one would come.”

4. The Old Testament lays the foundation for the New Testament.

“The significance of Jesus’s fulfillment of the Davidic Covenant cannot be over-emphasized. It is foundational for understanding the Lord Jesus Christ according to the New Testament authors.”

Believers often speak as if the gospel is first revealed in the New Testament. But Paul would beg to differ, Betts said.

“God proclaimed the gospel of salvation to Abraham and counted him as righteous according to his faith. God first communicated his plan for salvation through the person and work of the Messiah, in the Old Testament.”

“Something is wrong when one only studies the Scripture’s academically and does not receive nourishment,” Betts said. “The Old Testament unfolds the promise of hope, which is essential to living the Christian life.”

Theological Recovery in the Church

Southern Seminary President R. Albert Mohler Jr. praised Betts’s address and said he was thrilled that SBTS and Boyce students get to learn from a faculty committed to the authority of the Old and New Testaments.