The Southern Baptist Theological Seminary installed new leaders in two of the school’s most important offices this week in separate ceremonies in Alumni Memorial Chapel, with the provost appointment making Southern Baptist history. 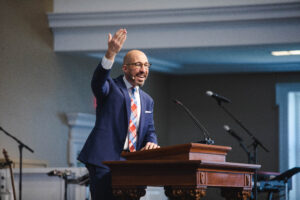 Jeremy Pierre was installed as dean of the Billy Graham School of Missions, Evangelism, and Ministry in a chapel service on Aug. 30 and Paul Akin was installed as provost and senior vice president for academic administration of the seminary on Thursday morning.

Paul Akin’s appointment is historic: he follows in the footsteps of his father, Daniel L. Akin, who served as provost at Southern Seminary from 1996 to 2004. They are the first father-son tandem in Southern Baptist Convention history to serve as provost of the same institution. Today, Daniel L Akin is president of Southeastern Baptist Theological Seminary in Wake Forest, North Carolina, an office for which he left Southern Seminary in 2004.

“There is nothing like this in Southern Baptist history,” Mohler said. “The only parallel to this I know is in the 18thand 19th centuries at Princeton Theological Seminary where there were fathers and sons that were serving in such similar capacities with names like Alexander and Hodge. This is glorious.

“One of the greatest joys of my life was to work with Dr. Danny Akin when he was the dean of the School of Theology and provost because it wasn’t just a colleagueship; it was and is a very deep friendship.”

Daniel Akin preached in SBTS chapel Thursday during Paul Akin’s installation service. Exhorting from Mark 10:35-45, Daniel Akin encouraged his son to remember that the call, opportunity, and ability to serve God are all gifts of grace. He warned Paul to guard against a sinful form of ambition that can ruin a man of God and destroy his calling. 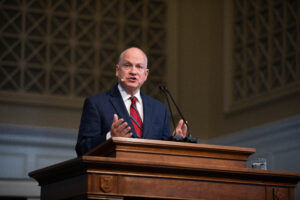 “And yet if you ever begin to think, ‘That is something I deserve. That is something I should have,’ let me tell you, ambition is a killer in the Christian life. There is such a thing as a holy ambition where you are longing with all of your being to honor and glorify God. I understand that, but I’ve lived for 45 years in ministry, and I’ve seen an unholy ambition grab the heart of those that at one time wanted to walk humbly before the Lord but now want to climb some pseudo-ladder of success, not to honor his name, but to build their own.”

Both Pierre and Paul Akin had been serving in their respective offices since earlier this summer, prior to the formal installation. Pierre was named dean early last month after 20 years of teaching and serving in various other roles at Southern Seminary and Boyce College.

Akin was announced as provost and senior vice president for academic administration in mid-June at the annual meeting of the Southern Baptist Convention in Anaheim. Previously, he was dean of the Graham School.

Pierre preached from Philippians 1:9-11 at his installation service, reminding students and faculty that a call to any role in ministry is a call to become a servant.

“I am honored to assume this role that bears the name of Billy Graham,” Pierre said. “I am deeply grateful for his ministry and the legacy that is represented by that name. The school is about missions and evangelism and ministry and that is a high privilege.

“I’ll let you in on a little secret about this role as the dean of the BGS. It’s the role of a servant; I serve the faculty, the faculty serves the students, so that you go out and serve churches locally and missions globally. We’re all servants, and I think we’re in good company in claiming this because the apostle Paul, about his apostleship, said this same thing.”

Mohler said he was convinced Pierre should be the man to lead the Graham School ever since the search for a new dean began.

“It makes me very happy that dean Pierre is taking on this role,” Mohler said. “This is a school which has a man’s name on it. Dr. Billy Graham became a very good friend to this school and to me during a very crucial time in our history. He put his name on it in order to tell Christians, ‘I believe in what they are doing there.’ I believe this school will be in good hands in the name of Christ under Dr. Pierre’s leadership.”