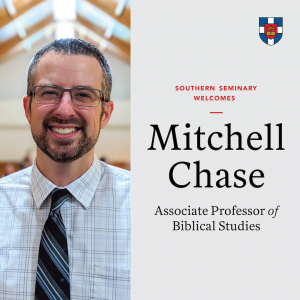 Chase, who brings years of experience as a pastor, teacher, and author, will join Southern’s faculty after previously serving as an adjunct professor at Boyce College since 2014. Along with a prolific academic career, Chase has served as the preaching pastor at Kosmosdale Baptist Church in Louisville since 2012.

Southern carries out its mission of equipping leaders for the local church through the faithful ministry of pastor-scholars such as Chase. Seminary President Albert Mohler said he is pleased to be adding a scholar of Chase’s caliber whose ministry feet are firmly planted in the local church.

“Mitch Chase is a remarkable combination of pastor and scholar,” Mohler said. “His pastoral heart is evident in the congregation he serves and in the devotion of its people. He is strong in the pulpit and he is strong in the study.

“I've had the great opportunity to work with Dr. Chase on a major work of biblical scholarship and ministry. I found him to be a wonderful Christian whose character is evident, whose scholarship is stellar, and whose gift of teaching is first rate.”

Chase is excited to join a seminary and faculty that has shaped his own life. Chase said he looks forward to stewarding his responsibility in training the next generation.

“It's such a joy to join the faculty at Southern Seminary. I love this place,” he said. “I admire these professors, and their writings and teachings have influenced me for many years. I’m honored to connect more deeply with this institution and its students. It is a privilege and weighty responsibility to be part of the training and formation of the next generation's leaders.”

Chase received his MDiv. and ThM. from Southwestern Theological Seminary before earning his PhD from SBTS in 2013. He specializes in biblical hermeneutics, Old Testament studies, and New Testament studies. He is the author of 40 Questions About Typology and Allegory, Daniel in the ESV Expository Commentary series, and numerous academic articles.

Hershael York, dean of Southern Seminary’s School of Theology, said Chase is the ideal combination of pastor and theologian that Southern seeks to produce, one who prioritizes theological education aimed at serving the local church.

“Mitch Chase embodies the kind of graduate we strive to produce at Southern: pastor-theologians who serve the Lord in the church and in the academy,” York said. “I recently preached through Daniel and his commentary was my constant companion. He has incredible exegetical skills but always connected to the life of the church.”