In February of 1997, Mary Mohler met with a few wives of Southern Seminary faculty members to share a burden and a vision that wives of seminary students needed to be encouraged and trained, and in the fall of that year, Seminary Wives Institute (SWI) was born. 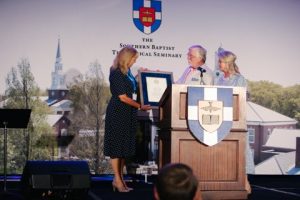 Tanya York, a longtime SWI faculty member and wife of Theology School Dean Hershael York, attended that initial meeting and has watched SWI grow into one of the seminary’s most vital and cherished ministries.

“Mary shared with us a passion, a burden, and a vision,” York said. “Mary’s passion very quickly spilled over to a willing group of participants from within Southern’s faculty wives as they joined her in investing in educating and equipping student wives in the service of the kingdom.

“God has used this incredible and fruitful ministry to equip, fuel, and inspire hearts, homes, churches ministries and lives in general.”

Hershael York, who teaches theology at SWI, said male students often stop and extol the incredible impact and encouragement SWI is having on their wives.

“Mary, our admiration for you is off the charts,” Hershael York said. “We owe you so much. You have had such a profound impact. It’s a wonderful thing to see the way your vision has affected these families and shaped them forever.”

That first class 25 years ago numbered 136 students; thousands of wives have taken classes in the years since. Tanya York said Mary Mohler’s ministry through SWI extends far beyond merely a list of names on class rolls. For SWI’s founder, each student is a dear sister in the Lord.

Mary Mohler deflected all credit; God alone has built the ministry, she said.

“All I can say is to God be all the glory,” she said. “This not at all a Mary Mohler effort, this is something the Lord did put on my heart in 1997. But then he also sovereignly brought alongside me a phenomenal group of faculty wives, such that a program like this doesn’t exist anywhere else on the planet. The seminary faculty also gladly gives their time in addition to full schedules to teach our student wives, and this is priceless. I am astounded and truly grateful for how the Lord has chosen to use SWI to his glory for 25 years.”

Distinguished Alumni of the Year

At the luncheon, Southern Seminary also honored two graduates as Distinguished Alumni of the Year: Sandy Wisdom-Martin and Wes Fowler.

Wisdom-Martin is executive director of the Woman’s Missionary Union (WMU) of the Southern Baptist Convention in Birmingham, Alabama, an office she’s held since 2016. Wisdom-Martin is a 1990 graduate of Southern Seminary, having given much of her ministry to the WMU: she has also served WMU in Texas, Illinois, and Arkansas. 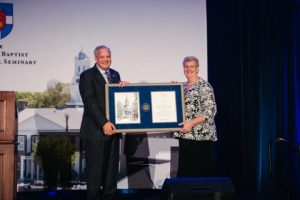 Mohler said his mother was deeply involved in WMU at his family’s church in Florida, and he is aware of how important WMU is to the life and ministry of the SBC.

“I later came to realize how important the WMU is to the world missionary task of the Southern Baptist Convention,” he said. “Southern Seminary and WMU have had a very close relationship from the very beginning of this institution.

“Sandy, you add grace, Christian character, dignity, love, and encouragement to the rest of us. We’ve come to love and appreciate you, and it is my great honor to present you with this award.”

Fowler is a 2015 DMin graduate of SBTS and is presently working on a PhD at Southern. Since 2011, Fowler has served as pastor of his home church, First Baptist Church of Mayfield, Kentucky. The church was catastrophically damaged and the city of Mayfield utterly destroyed last December by a monstrous tornado that roared through Western Kentucky. 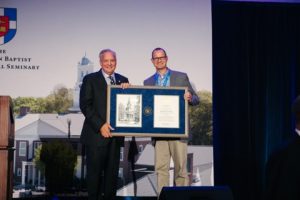 In the days after the storm, Fowler and his church became the epicenter of communicating the tragedy to the outside world, often able to tell gospel truth along the way. In the months since, even as FBC Mayfield slowly rebuilds, Fowler has led his congregation to help meet the broken city’s vast needs.

“I was just so moved to see a local church taking such responsibility in the midst of that devastation, to show the love of Christ and the hope of Christ and a commitment to a community,” Mohler said.

“We’re living in a world in which a sense of community is being atomized and lost. In a place like Mayfield, Kentucky, First Baptist Church is not just an address. It is a powerful witness.”