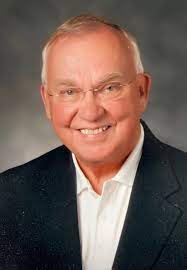 Seminary President R. Albert Mohler Jr. spoke of Pope as a friend and cherished member of the Southern family.

“We are gathered to honor one of our own,” Mohler said. “To know Howard Pope was to know one who had never met a stranger. He invested his interest in me, in Mary, in Southern Seminary, in his church, and in the Bible.

“Howard was a Christian man who grew in his faith and commitment to Christ. His devotion to Christ became a hallmark of his life and he translated that into gospel friendship, and it showed in his Christian joy.”

Pope’s life displayed love for his wife, Harriet, and his children: Mary Sue, Thomas, and Jennie, and his grandson, Jonas. Above all, he loved his Lord and Savior Jesus Christ.

Pope graduated from the University of Louisville School of Medicine in 1968 and served as a family physician in southern Indiana for more than 40 years. He also achieved the rank of Brigadier General in the U.S. Army Reserves. He served as a trustee at Southern from 2015 to 2021 and has been a Southern Seminary Associate since 2006.

Clint Pressley, who served as a trustee with Pope, said he was a great encourager.

“Dr. Pope always talked about the preached word and was always encouraging to me,” Pressley said. “The last text message I got from him said to pray for him. That hospice was coming in, and that he is going home. What a joy it is to stand here with men and women who loved him. He showed the kindness of a Christian friend.”

“My genuine first impression of Howard was how much he loved and cared for Harriet. Howard was a general, a doctor, a trustee, but the main thing I detected was a man who loved Scripture and his wife.”

As a beloved servant of the Southern community, Pope’s legacy will live on through the advancement of the gospel through SBTS and Boyce College. While mourning, Pope’s family and friends cling to the hope of resurrection.

Said Mohler, “If we had cannons, we would fire them in honor of Howard. We have no cannons. What we have is the promise of a trumpet call that will rouse Howard Pope from the grave.”