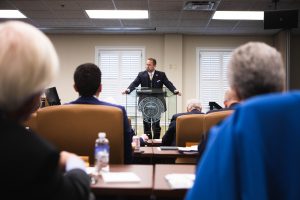 The new budget represents a $2.3 million increase (4.8 percent) from the budget trustees approved last year. Over the past two budget cycles, Southern’s budget has grown by more than $13 million despite challenges from the recent pandemic.

“God continues to bless Southern Seminary and our churches continue to send us the most amazing students,” SBTS President Albert Mohler said.

“This is a great era in the history of this seminary and college and we are pressing ahead. Our board of trustees and faculty and staff work together for the best theological education we can provide our students for a lifetime of faithful ministry. We pray to bear this great mission with faithfulness until Jesus comes.”

“We believe this is a conservative budget,” said Jon Austin, senior vice president for institutional administration. “We are mindful of the economic state of not only the country, but the world, so we want to navigate that and be very mindful of that.”

Two years ago, the seminary cut tuition by 15 percent to stabilize student enrollment during the pandemic. Trustees approved a small tuition increase of four percent for the coming year.

In other business, the board unanimously elected Josh Powell  as chairman of the trustees, replacing Clint Pressley, who has served in that role for the past two years.

“It’s been joyful to serve and it’s been intense,” said Pressley, who has served as pastor of Hickory Grove Baptist Church in Charlotte, N.C. for the past 12 years. “It has been eye-opening to see all the hard work it takes to run a seminary. It has been deeply edifying to see the God-honoring work leaders put forth on behalf of theological education. It has been a great privilege to serve in this role.”

Powell serves as pastor of First Baptist Church of Taylors, S.C. and has served as a trustee at Southern for nearly six years. Powell received his MDiv from Southern in 2003.

Board members honored the faithful service four trustees who are rotating off the board after 10 years of service: Ellie Coursey (KY), Nick Floyd (AR), Patricia Skelton (KY), and Merril Smoak (CA).

Trustees also heard a testimony from Keith Percic, an MDiv student in the Billy Graham School of Missions, Evangelism, and Ministry, who detailed how Southern, its faculty, and its students have deeply impacted his life.

In his report to trustees, Mohler said: “If your heart is ever heavy, or you worry about the future of the church, just meet one of the young students on thus campus. You will thank God for giving Southern Baptists a future. We get to see that bright future on this campus.”