Southern Seminary encouraged students, faculty, and staff to get involved in missions both locally and globally during the school’s Great Commission Week April 12–14. 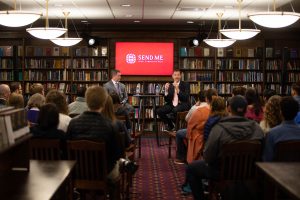 Southern filled the week, themed “Send Me!”, with events designed to present options and information for the many students considering full-time missions after graduation.

Paul Chitwood, president of the International Mission Board, kicked off the week with a chapel message on the need for the gospel in solving the world’s greatest problem.

Paul Akin, Dean of the Billy Graham School of Missions, Evangelism and Ministry, interviewed Chitwood in The Bookstore at Southern on the mission of SBTS and the IMB. Southern has proudly partnered with the IMB for 160 years and the seminary is more mission-centric than at any other time, Chitwood said.

“Today’s SBTS is more focused on deploying a generation of missionaries to the nations than at any time I’ve witnessed over the past 30 years,” he said. 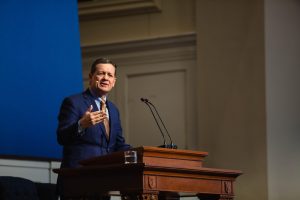 Southern also hosted Kevin Ezell, president of the North American Mission Board, for Thursday’s chapel. Ezell called for churches to prioritize sending missionaries in a sermon on Acts 13:1–8.

Akin interviewed Ezell, who reported on the work God is doing through Send Network—the largest church planting agency in North America. Since 2010, Southern Baptists have planted 8,200 churches across North America. Southern is a proud source of training for the ministers and missionaries supporting the work of NAMB across the continent.

All in all, the week provided resources and guidance to any student called to serve in local, regional, and international missions. The IMB, KBC, NAMB each offered info fairs and active missionaries from each agency offered testimony and answered questions from prospective missionaries. 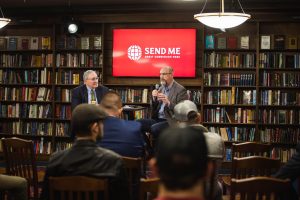 Great Commission Week is no exception to Southern’s mission, Akin said. It’s just one of the ways Southern continues to fulfill its calling, not only as an academically rigorous institution, but as a training ground for those called to take the gospel to the nations.

Said Akin, “At the core, Southern Seminary and Boyce College are Great Commission institutions. There is something uniquely unifying about focusing our minds and hearts on God’s mission in the world. We are at our best when the Great Commission is our priority.”