Important ground on our culture’s understanding of human nature has been lost in the last decade, Ryan T. Anderson told the Southern Seminary community during the annual Gheens Lectures March 16-17. 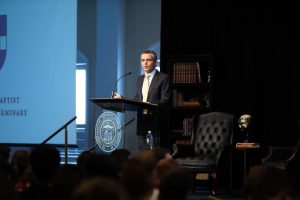 Truths that were self-evident a generation ago now require an academic response in the public sphere, Anderson argued.

“None of our grandparents needed academic arguments about the dignity of human life, the value of life in the womb, the nature of marriage as a union between a husband and wife, the importance of our embodiment as male or female, or the free exercise of religion,” he said.

“Unfortunately, we now have to actually make arguments and engage in a political process to see that our laws reflect the truth.”

Anderson is founding editor of Public Discourse and president of the Ethics and Public Policy Center in Washington, D.C. He is author of five books, including  When Harry Became Sally: Responding to the Transgender Moment and Truth Overruled: The Future of Marriage and Religious Freedom.

Anderson identified four creational truths found in nature and the opening chapters of Genesis that Christians must defend to promote a flourishing society.

Christians should fight for legal and cultural change to protect the infants while also aiding and supporting women harmed by the abortion industry.

“The way in which we most grossly violate that we are made in the image of God is the 600,000–900,000 American lives that are killed in the womb (each year),” Anderson said. “The child has a right to life, and we have duties to protect that child in the womb and to assist those mothers facing difficult pregnancies. It’s a two-way street.

Anderson urged that work must be done to recover a sound understanding of the sexual differences. The answer is not the harmful transforming of the body, but a return to God’s good design revealed through the natural law and Scripture.

“We have made mistake of shifting between two extremes—a feminism that views equality as sameness and, on the other hand, the overreaction that results in radical stereotypes,” he said. “From those two extremes, we’ve arrived at the point where the body does not matter, and that gender is a spectrum.

“Equality does not mean sameness. A decade ago, we had not fully appreciated what the ‘T’ in LGBT stood for. In what seemed overnight, activists won the legal redefinition of marriage and then pivoted to the ‘T’.”

“It’s not the God created two random sexes,” said Anderson. “God created male and female precisely with the design for us to unite as one flesh.”

While ground has been lost in the legal definition of marriage, Anderson pointed out that court cases do not determine truth.

“Men and women are distinct and complementary. It is a biological fact that reproduction requires a mother and father and a social reality that children deserve both a mother and a father. Obergefell has not changed these facts.”

A sound approach to politics and a foundation for human rights cannot exist without the natural law giver.

“We’re not just created in the image of God, but we are made for God,” Anderson said. “Which is simply to say that religion should have a role in our public life. Not only have we secularized our public square, but now we are using the law to punish people who have not gone along with secularization.”

Anderson explained the importance of recent religious liberty court cases and stressed that we “must not conflate the free exercise of religion with the freedom of worship.”

Go, Live, and Make an Impact

Christians have a keen opportunity to make an impact with their lives, showing the culture the wisdom of living in accord with God’s ordering of things.

“All of us have a vocation to live this stuff out,” he said. “The most persuasive defense of these truths is not the arguments that we make but our embodied witness—through our families, friendships, through our professional vocations, and through our church membership.”