Alienation from family and friends is a real threat to those who leave Islam, scholar David Bertaina said at the Jenkins Center’s academic lectures held February 11–12. 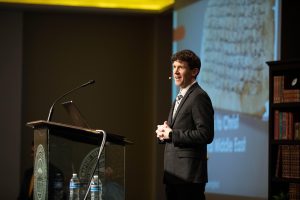 Bertaina equipped the Southern Seminary community to reach their Muslim neighbors by surveying and drawing application from historic examples of Muslim converts to Christianity. Bertaina is professor of history at the University of Illinois Springfield.

“Anyone who converts to Christianity is going to be giving up a number of resources in their life,” Bertaina said. “They're going to be feeling that they need somebody to be there for them.”

Learning from past Muslim conversion stories can help Christians relate better to converts out of Islam. The apostle Paul’s Damascus Road experience provided one of the perfect templates for conversion. But conversions, especially from Islam, are often more complicated, said Bertaina.

A prominent convert Bertaina noted was Abd al-Masih—a ninth-century Muslim convert who participated in raids against Christianity before he became a monk and eventually faced martyrdom.

“When he was on a trip, one of his former fellow raiders saw him looking like a Christian and said, ‘wait, I remember you, what are you doing?’” Bertaina said. “He was brought to the local authorities, and they said that he must reconvert. According to Islamic law, there was no other option. When he refused to come back to Islam, the local governor had him beheaded.”

Stories like Abd al-Masih’s are beneficial for Christians because they help anticipate the types of questions many Muslims ask and the importance of understanding the potential consequences of leaving Islam.

“We need to be open to people and be aware of when they are in crisis,” Bertaina said. “If there's somebody of another faith who's having questions, it's a great opportunity to ask them to open up.”

Bertaina pointed to the importance of a Christian’s daily witness to their Muslim friends and neighbors. As many conversions from church history show, “lived Christianity” is a powerful testimony to the truthfulness of the gospel.

“You can provide an experience of lived Christianity,” said Bertaina. “That's going to increase the opportunity for someone to consider what Christianity is all about. Because it's not just about a book, it's about a person.”