At the moment, there are critics on every side of the Southern Baptist Convention and challenges galore, he said, but this is not the first time the denomination has faced serious battles without and within. Allen, a two-time graduate of Southern Seminary, is president of Midwestern Baptist Theological Seminary in Kansas City. 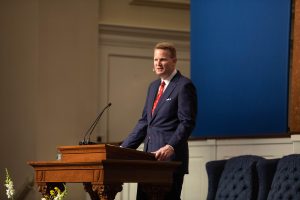 “I believe that Southern Baptists are a great people,” Allen said. “I believe they are congregated in great churches and formed together in a great convention. Yes, God will discipline us from his Word and by his Spirit and even through instruments and means beyond our control like the secular media as they press in on our hypocrisies and on our failures.

“But at our heart, as a convention of churches, as a denomination, I believe Southern Baptists are a great people and to serve them is a glorious opportunity and a sweet stewardship. I say that I am an optimist about the Southern Baptist Convention, and I say that not half-heartedly. To be an optimist in these days might make one a contrarian but I believe that is a position we can take and should take.”

Allen said Southern Baptists must make five healthy choices if they will remain faithful. The denomination must:

The SBC, her leaders, and churches, must not be ambiguous on major ethical issues of the day, even if it may seem the denomination is overreacting or comes off as alarmist to the watching world.

One current cultural challenge the SBC currently faces is critical race theory (CRT). Another is all things related to sexuality, marriage, gender, personhood, and biblical complementarity, he said. The first challenge, CRT, may wane in years to come, Allen said, but the second certainly will not.

“We live in an age where we’d better be clear and loud and frequent about our biblical beliefs,” Allen said.

“We serve a denomination that lives fearful of doctrinal decline, and I believe that is a good thing. Yes, it can lead to suspicion and accusations at times, but I would rather live in a convention of churches that is fearful of doctrinal decline so much that at times they are overly alarmist than to serve in one that assumes the best and hopes for the best and isn’t willing to sort things out; that’s when you wake up one day and you’ve drifted far, far away from your doctrinal foundations and your mission commitments.”

No matter how gracious our tone, contemporary culture will not accept biblical views of issues related to gender, marriage, and sexuality.

“There is no perfect pitch to the ear of the secularist,” Allen said. “Biblical sexual ethics, no matter how politely stated, will not be met with cultural approval.”

Southern Baptists must hold fast to their confessional statement, the Baptist Faith & Message 2000, so that those who consider affiliating with the denomination or joining its churches will know precisely where the SBC stands on critical doctrinal issues.

“Doctrine first, mission second—in that order—defining the boundaries of our ministry coalition,” Allen said, “We must have the denominational self-confidence to hold fast to our confessional statement, hold to our convictions, and let that define our fellowship.”

For decades, the SBC has happily touted itself as the largest Protestant denomination in the United States but pursuing sound doctrine and sound living could make those numbers less impressive, Allen said.

“In a denomination like the Southern Baptist Convention, it is appropriate to take careful looks at how our churches are doing, how our witness is doing collectively,” he said. “And as we pursue spiritual and theological health in the future it most likely will mean that in our generation, we will find ourselves serving a denomination that is getting smaller, not larger. And we have to become okay with that. . . . Perhaps God wants to make us smaller.”

Collectively, SBC churches are composed of nearly 14 million members, but only about half attend church on any given Sunday morning, a huge red flag for denominational health, Allen pointed out.

“It is incumbent upon us to train ministers who will preach the Word and who will treat membership seriously, to rediscover a disciplined congregation. What a gift that would be in our generation, to lead that type of renewal in our churches.”

Trust brings with it credibility, Allen said, and Southern Baptists must be trustworthy in both their theological commitments and in faithfully living in obedience to God’s Word.

Allen says he believes Southern Baptists will overcome the present challenges and will continue doing faithful kingdom work for the glory of God.

“I’m hopeful about our future because I know there are [faithful people] in the pews of our churches and I know many faithful pastors serving our churches. And I believe I know their commitments and their determinations that as a people, as a convention of churches, we’ve shown ourselves not only willing, but determined to self-assess, to self-correct when that is necessary, and we have the means to do so.

“As we do, we know that we are a people of the book, and I believe God honors those who honor his Word . . . and as our churches are faithful, Christ is faithful to his churches.”