Union with Christ is the Christian Doctrine of Salvation, Noted Theologian Says in Annual Norton Lectures

Union with Christ is central to the doctrine of salvation, theologian Fred Sanders told the Southern Seminary community at this year’s Norton Lectures Series, held February 9-10 in Heritage Hall. 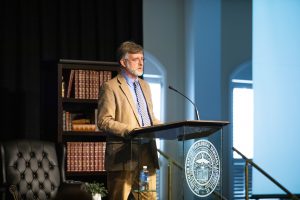 Sanders gave three lectures on “Union with Christ, Systematically Considered.” Sanders is professor of theology at Biola University and the author of numerous books, including The Deep Things of God: How the Trinity Changes Everything and The Triune God.

In the first lecture, Sanders argued that union with Christ is a unifying theme of soteriology, even though it is sometimes underplayed in contemporary theology.

"It is the powerful, scriptural, and spiritual drive toward union with Christ that gave rise to the creeds."

Being prominently present in the early church councils and in the writings of reformer John Calvin, union with Christ is fundamental to any unified Christian teaching on salvation, he argued.

In the other lectures, Sanders examined the doctrine biblically and theologically.

Union with Christ is one of the key themes in the apostle Paul’s theology, particularly in Romans 5-6 and in the first two chapters of Ephesians—often summarized concisely in two words: in Christ. But the doctrine is also present in the four Gospels, Matthew, Mark, Luke, and John, he said.

Sanders presented several complementary definitions of Gospels, agreeing with another contemporary theologian that a Gospel is “the life of Christ written in his presence.” A crucial part of a Christian’s union with Christ is that a believer reads the story of Jesus’s life with Jesus spiritually present within the believer. Another definition of Gospel Sanders gave that relates to union with Christ is “a life of Christ written in his presence for the purpose of being read in his presence.”

Said Sanders, “Gospels exist because the risen Christ oversees this kind of written remembering of his life. When Jesus rose from the dead, he not only came back to life, but he also brought back with him the life that he had already lived. In addition to being now physically raised, he was also now—we might say—biographically raised. His biography came to life with him and manifested its identity as the human life of a divine person.

“That biography is where we look to know him as he is even now—the medium of a personal encounter with Jesus here and now is the recounting of what he did and said then and there. The writing of a Gospel is empowered by the Holy Spirit. The writing is also shaped by the presence of the living one whose story is told in it. The living presence makes a crucial difference in what is selected and how it is narrated because the words of a Gospel are the self-presentation of the risen Christ.”

Drawing on the work of theologian Hugh Martin—particularly in his Christological work The Abiding Presence—Sanders showed the devotional importance of understanding more deeply our union with Christ. Too often, Sanders said, Christians tend to settle for merely the biography of Jesus to the exclusion of the spiritual presence of Jesus—or vice versa.

Leaving off either the life of Christ as the Gospel writers expressed or the presence of Christ as we read of him in sacred Scripture is spiritually unhealthy, sometimes even leaving us with a Jesus of our own making.

“One fear is that many believers are in danger of settling for a life of Jesus that is not much more than a life of Lincoln or of Napoleon or of Frederick Douglas,” Sanders said, quoting Martin in part.

“If all we had was the presence of the risen Christ but no written biography, what would we have? A powerful spiritual reality—Christ himself—but what would our thoughts and conceptions about that presence be? What would guide them or shape them? All is vague and solemnizing, very hazy—very encouraging and consoling—but also very indefinite and somewhat ghostly. Before long, instead of concrete knowledge of the life of Jesus Christ, our lives and affections would fill up with emotions, imaginations, and conceptions of our own provision, mere pietistic, sentimental conceptions of his existence.

“Many believers are in danger of settling for an unformed and undisciplined sense of Christ’s presence always shading off into a personal Jesus shaped to fit our own heads or hearts.”

Sanders recommended a book by Puritan theologian Isaac Ambrose, Looking Unto Jesus, as a solid resource for meditating deeply on a Christian’s union with Christ.

“One of the important parts of Ambrose’s work is that he shows the difference between knowing about a doctrine and considering it,” Sanders said. “Considering a truth about Jesus is a step further than knowing. Considering is digesting a truth for the strengthening and nourishment of our souls. This is the work of meditation. We need both modes of looking to Jesus.”

He pointed out that theologians and seminary students often read far more theological truth than they can possibly meditate on and live out within a short time span. Union with Christ is one of those doctrines that deserves a deep dive and deeper meditation, he said, because the Holy Spirit has revealed much about Christ and a Christian’s relationship to him in the doctrine.

“You will take in more truth in an afternoon than you can possibly live out, so you are top heavy in that way, walking around with a bunch of notions you haven’t yet lived out,” he said.

“There’s no way to catch up. If you’re reading theology a lot, you’re always going to have more in your head. You just need to remember to keep an index card in your pocket (that says) ‘I don’t actually have an experiential grasp of all that I know be true.’ But we need to always be working toward a deeper experiential understanding of God’s truth.”