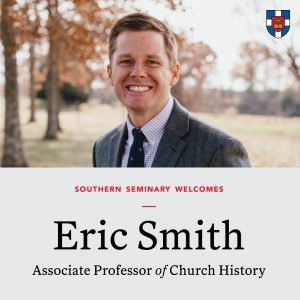 Smith, who received both his M.Div. and Ph.D. from Southern, will serve as Associate Professor of Church History. He has been the Senior Pastor of Sharon Baptist Church in Savannah, Tennessee, since 2013, a role he will continue while serving on faculty at Southern.

“Eric Smith is a premier historian who has already produced a wealth of important research on the Baptist tradition and church history,” Southern Seminary President Albert Mohler said.

“He is a model scholar with the heart of a pastor. His research is stellar, and his heart for the church is evident. I am incredibly proud that he has joined the Southern Seminary faculty, and generations of students will bear his professorial imprint.”

Smith is the author of three recent books on Baptist history: Order & Ardor: Oliver Hart and the Revival of Spirituality of the Eighteenth-Century Regular Baptists of South Carolina (University of South Carolina, 2018), Oliver Hart and the Rise of Baptist America (Oxford, 2020), and John Leland: A Jeffersonian Baptist in Early America (Oxford, forthcoming 2022).

Smith previously served as an Adjunct Professor at Southern for several years and says it’s an honor to teach students at the institution that educated and invested in him.

“I am thrilled and humbled to join the faculty of Southern Seminary, an institution God has used to shape my life and ministry so profoundly over the past 15 years,” Smith said. “The opportunity to now invest in a new generation of students is a sweet and unexpected gift from the Lord’s hand. I am especially excited to be teaching courses in American and Southern Baptist history at an institution with such a rich heritage and the place where I first learned the Baptist story.”

A native of Dyersburg, Tennessee, Smith has worked in local churches since graduating from Union University in 2008, first as pastor of Curve Baptist Church in Ripley, Tennessee, from 2008–2013. While in college, he served as college minister at Englewood Baptist Church.

He fits Southern’s faculty well as a scholar who is also deeply devoted to the local church.

“Eric Smith has established himself as one of the most gifted and prolific young historians of Baptists in America,” Provost Matt Hall said. “His scholarly work is of the highest standard and reputation.

“But Dr. Smith is also a dedicated pastor and churchman. This wonderful combination makes me especially happy to welcome him to the Southern Seminary faculty. His addition strengthens the already outstanding church history department in the School of Theology. I cannot imagine a better place or time for students of Baptist history than SBTS right now.”

Hershael York, Dean of The School of Theology at Southern Seminary, looks forward to students benefiting from the heart and mind of Smith as a pastor-scholar.

“Dr. Eric Smith brilliantly embodies the pastoral priorities and doctrinal distinctives of Southern Seminary. He teaches and writes about Baptist history with a pastor’s heart, a theologian’s mind, and a scholar’s attention to detail. I believe he will be the catalyst that will stimulate a new generation of historians to write about the fascinating journey of the people called Baptists.”

Being a pastor, Smith said, serves as a constant reminder that the truths of theology and church history must always teach the people of God how to live more faithfully.

“I have spent the past 13 years as a local church pastor, so application for the people of God is never far from my mind when I study, write, and teach church history,” Smith said.

“We learn so much about following Christ today from the men and women of the past—both in their positive and negative examples. These lessons of church history instruct and encourage us personally as disciples of Jesus, and they equip us to serve his church more faithfully in our time. I consider it an honor to help pass along some of these lessons to the rising generation of ministry students at Southern Seminary.”

Smith and his wife, Candace, have been married since 2008, and they have three children: Coleman, 11, Crockett, 8, and Clarabelle, 6.