“We Have to Live Out Our Faith”: SBTS Alum Leads Church Amid the Rubble of Deadly Storm’s Wake

That’s how long it took for the storm to explode Wes Fowler’s carefully regimented weekly schedule and, of profoundly more importance, to change his life and the lives of Mayfield, Kentucky’s citizens forever. 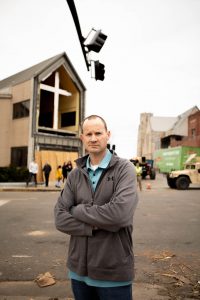 Fowler, a PhD student at Southern Seminary and 2015 DMin graduate, spent the daytime hours that Friday as most busy pastors do—finishing his sermon and preparing his heart to preach to God’s people on the fast-approaching Lord’s Day.

But by the next day, Fowler was being interviewed by CNN, the Washington Post, and other local and national media outlets about what had unfolded in his hometown during that tragic half-minute late Friday night.

Fowler, with his wife and three kids, survived the deadly tornado that obliterated Mayfield, Kentucky, and the surrounding area on December 10, killing at least 84, including one member of the church he pastors, First Baptist Church of Mayfield. Several FBC members lost homes and property. Mercifully, the storm spared Fowler’s house.

In the days since, he’s been responding to a non-stop barrage of queries from national news media, along with dozens of emails and text messages offering help with recovery. FBC staff members and volunteers are operating out of a motor home positioned on church property across from the main sanctuary. During our interview, he received a call from the mayor of Mayfield, and his phone beeped regularly as text messages rolled in.

“The last few days have been unique,” he said, his phone lighting up with yet another unknown caller, this one from Mississippi.

“See, look at that,” he said. “There have been phone calls from all over the country, text messages coming in, emails coming in. On day one I was trying to respond to them as they came in, but now there’s an overwhelming feeling that I can’t keep up. I want to, but at one point I had over a hundred text messages that I hadn’t even seen yet.”

Fowler and his church have become an epicenter for communicating the tragedy to the outside world. Last week, he was interviewed by CNN’s Anderson Cooper. Amid the rubble, Fowler has been amazed at how God has given church leaders the opportunity to share the gospel with media members and beyond.

Less than 48 hours after the storm, Fowler and the staff organized a Sunday morning prayer service at the damaged building. They prayed, sang hymns, and worshiped the Lord. For most FBC members, it was their first look at the torn city.

“That was very hard,” Fowler said. “It was difficult to see the heartbroken looks on their faces. We were and are still learning how many of our people were affected, but many of our members showed up to pray and worship our great God.”

FBC held a similar service yesterday and church leaders are pondering how the congregation might continue to gather, perhaps in smaller groups, while the church is repaired, an effort that will take many months and millions of dollars. FBC Mayfield has survived much adversity since it first met in 1843 on the outskirts of Mayfield.

One week after deadly tornadoes rampaged across Western Kentucky, Mayfield looks like old photos from bombed out cities in World War II; it is as if a massive lawn mower sat and spun over the town during those horrific seconds. For Fowler, this tragedy is deeply personal; he grew up in Mayfield, graduated from high school here, came to faith in Christ here, and has pastored his home church since 2011 here. 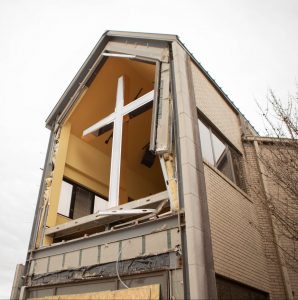 But “here” will never be the same.

“I think the emotional part of this I know some of this is not coming back, and it certainly will never be the way it was. Some of it will be built back, and I think we’re going to be okay at First Baptist; but it’s just not going to be the same Mayfield. It’s going to be different; there’s no way around it. Everything in downtown Mayfield is gone except for our church building. Our building is the only one left standing that still has structural integrity.”

In the days before the storm struck Mayfield, forecasters warned that a rare December outbreak of violent tornadoes was possible. Fowler figured there might be bad weather but thought it would miss Mayfield. A tornado passed nearby in 2016 but dodged the city.

But on that Friday as the storms grew worse and the long track tornado that would decimate Mayfield, Dawson Springs, and other Western Kentucky communities slithered toward his community, Fowler decided it was time for his wife and three children to seek shelter at the church, two miles from their house. The church has an underground tunnel that connects the main church building to the children’s center across the street.

Fowler and the family of youth pastor Kody Hopwood, a MACE graduate of Southern Seminary, arrived simultaneously at the church. It was 9:20 p.m.

Wes and Kody briefly debated whether the tunnel or the gym would provide a safer haven. They chose the tunnel. It was a life-saving decision; the gym was pummeled by the storm, its roof pulled off like the top of a tin can.

“I could hear it coming and it grew louder and louder,” he said. “There was a vacuum in the tunnel in a moment. The ceiling tiles began to pop up and down. The pressure changed. The lights went out, which made it a little scarier, and the kids were screaming and crying. We got into a section on the floor.

“My wife got on top of my daughter, and I got on top of my two sons. Kody and Heather were on top of their family, so there for a few moments we were laying on top of our families as debris and dirt filled up the room. It was a terrible, loud sound. It lasted 30 seconds to a minute, but it felt like five minutes.”

Wes and Kody emerged from the tunnel. What they saw was incomprehensible. 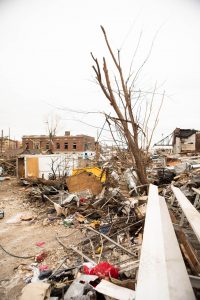 “I never dreamed the church was damaged like it was,” Fowler said, his voice cracking with emotion. “I came back up and looked outside into Mayfield for the first time. I had my flashlight, it was still raining, and I’m looking around, and it was the most disorienting thing. I thought something was wrong with me. I was confused. I couldn’t see any buildings. I couldn’t see buildings I’ve seen my whole life.

“This glass shop here (next door to the church) where we know the owner and where we buy our windows: I couldn’t see it. I could see our church bus. It had been inside a big garage, but the garage wasn’t there anymore. The bus was smashed. It was disorienting, a bit confusing. Then it started to sink in: It’s all gone.”

In the days since, the world has seemingly descended on the region, hundreds to help recovery efforts and many to report on the unconscionable destruction. Fowler, his staff—four of whom either hold degrees from Southern or are current students at the seminary—and numerous volunteers have been handling media requests while also fanning out to help church members whose lives have been affected by the storm.

FBC’s staff has faced the inevitable existential question: “Why did God allow his people to suffer such seemingly random affliction?” Fowler’s daughter asked him a similar question. The longtime pastor drew upon John 9 where the Lord’s disciples ask him whether a man was born blind due to his sin or his parents’ sin.

“I told my kids, we have to use this for the glory of God,” he said. “The reality is I don’t know why it happened to Mayfield on this day at this time. But I do know what we can do now, though: We use this opportunity to share the gospel. I’ve said to several media sources that I think when times are good, it’s very easy to be a follower of Christ. When times are bad, it’s more difficult, but that’s what people are watching.

“We have to live out our faith now. We have to share the gospel now. In fact, this teaches us that the gospel is really our only hope. Our only hope is Christ, and this scene in Mayfield visually depicts that. You can’t put your faith in a building. You can’t put your hope in a city. As Hebrews 13 tells us, our faith and hope is in an eternal city. That’s what I’m trying to teach my children. That’s what I’m trying to tell the community in bite-sized pieces as it comes up.”

Blake Shuecraft, a current Seminary Track student at Southern/Boyce, who has served as associate pastor of children at FBC Mayfield since 2019, said his seminary training has been invaluable in helping others sort through the questions that come with a tragedy of such magnitude. Shuecraft grew up in Western Kentucky and his wife is a Mayfield native.

“There are a lot of people who are open to hearing the gospel who might not have been before,” Shuecraft said. “I’ve been thinking about Dr. (Tim) Beougher and how he uses the term ‘being sensitive to opportunities’; what an opportunity right now.

“We’ve been fielding questions as to why this happened. We don’t know necessarily why, but we do know that now we have an opportunity to be a light to the community. We have an opportunity to offer help to those who are hurting through Jesus. It’s been great to be able to apply those great truths we see in Scripture that we’ve learned at Southern. It’s being put to use right now. It’s all come together.”

How Can We Help?

Fowler said the storm has left collateral damage that may last long after the CNN trucks leave and a new Mayfield is rebuilt: his two younger kids are having nightmares about what happened that catastrophic Friday night. He’s asked that fellow Christians pray for his family and the many others who are likely to struggle similarly with the tragedy.

Much help, including teams from the Southern Baptist Convention and Kentucky Baptist Convention, has descended on Mayfield, but Fowler said his church and the city will likely need more help even after the storm’s one-month anniversary passes.

He’s asked that churches and believers wanting to help consider getting in touch sometime around mid-January.

“Right now, there’s plenty of help,” he said. “But it will dwindle after a few weeks because that’s the nature of things. Call us in a month. We’re still going to need plenty of prayer and plenty of help because this has changed things here forever.”

Editors’ note: If you or your church are interested in aiding relief efforts in Western Kentucky, please contact the Kentucky Baptist Convention.