Phillip Landgrave, who died September 24 at age 86, left behind a legacy of faithfulness to his family and energetic service at Southern Seminary and in a host of local churches in Louisville and across the South. 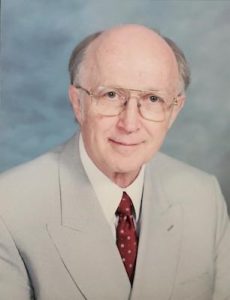 Southern Seminary President Albert Mohler remembers him for his work as a composer and the tremendous level of energy he brought to ministry.

“Phil Landgrave was a whirlwind of energy and composition,” Mohler said. “He composed more than 500 published works of church music. He contributed hymns to the Baptist Hymnal and many other works. He was a devoted servant of Christ and a master teacher.

“To know him was to know a fury of creativity and a tremendously gifted musician. He invested his long teaching ministry at Southern Seminary and left an indelible mark on hundreds of students.”

Landgrave was survived by his wife, Gloria, three children, and eight grandchildren. His son, Kevin, died suddenly earlier this year from a brain aneurysm. The Landgraves were married for nearly 62 years—their 62nd anniversary would’ve been today—October 4.

Born in Marion, Indiana, Landgrave began part-time on faculty at SBTS in 1964 before moving to faculty full-time the next year as associate professor of church music. Landgrave served on Southern’s faculty as V. V. Cooke Professor of Church Music for 35 years. He retired in 2000 and continued as a senior professor until 2013.

“I can only imagine how many Christians walk around with spiritual songs ringing in their minds, without knowing that it was Phil Landgrave who wrote that tune,” Mohler said. “Friends and family remembered Landgrave waking up in the middle of the night with a tune in his mind, and writing down the tune before it left him.”

His ministry in the local church began in the late-1950s when he served on staff at First Baptist Church of Opelika, Alabama. He enlisted in the U.S. Army and moved to Fort Benning, Georgia. During his time there, Landgrave he served at Eastern Heights Baptist Church in Columbus, Georgia, where he met his wife, Gloria. He served as a bandsman in the army and received the Army Commendation Medal for meritorious service and exceptional compositions. The next stop for the Landgraves was Louisville, when Landgrave attended Southern Seminary.

Landgrave graduated from Eastern Kentucky State College in 1957 with a bachelor’s degree in music and was a two-time graduate of Southern Seminary, completing a master’s degree in church music and a doctorate’s degree in 1966. He did post-doctoral studies at the University of Southern California, Indiana University, and also studied in England.

He served as minister of music for 12 churches in Alabama, Georgia, Kentucky, California, and England. Landgrave was a prolific writer of music; he composed and arranged more than 1,000 works, including some 200 published anthems, cantatas, solos, and other extended works. During his time at SBTS, Landgrave wrote several well-known cantatas and anthems such as Purpose, from which the hymn “Just as I Am” was taken for the Baptist Hymnal.

Mohler commented, “Phil dearly loved his family, starting with his sweet wife, Gloria. The Southern Seminary family is praying for Gloria and the entire Landgrave family at this time. “We thank God for the life and legacy of Phillip Landgrave.”