A Commitment to the Biblical Languages Helps Guard the Faith, Plummer says in Faculty Address 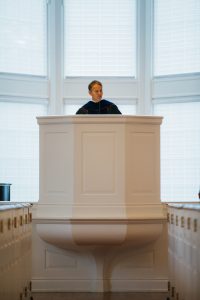 In an age when evangelical institutions are cutting language requirements, Plummer gave five reasons why the languages are necessary and then pointed to four modern challenges. Plummer serves as the Collin and Evelyn Aikman Professor of Biblical Studies. The entire address may be viewed here.

“Because we at Southern Seminary value the breathed-out inerrant Word of God as the final authority for our Christian beliefs and practices, we must be students of the original languages,” Plummer said.

Plummer argued that neglecting the original languages is one of the first steps institutions take toward embracing liberalism.

“A rejection of biblical authority goes hand in hand with the removal of the biblical languages from a seminary’s curriculum. In these days of catastrophic moral and cultural decline, if we are not lured by the never-changing Scripture, we will soon look no different than the culture around us.”

Now more than ever, preachers, teachers, and students need confidence in handling God’s Word. Plummer emphasized that training ministers to rightly divide the Word of truth in the original Greek and Hebrew is the best way to prepare the next generation of Christian leaders.

“I confess that I find it embarrassing that evangelical seminaries are reducing biblical languages to an optional part of their MDiv curriculum. We’re sending soldiers into battle with muskets and powder horns instead of powerful and accurate weaponry.”

Plummer encouraged students and faculty members to retain their Hebrew and Greek. Daily Dose of Greek, which Plummer hosts, teaches and promotes the importance of the biblical languages to a global audience.

“What a joyful and unique stewardship we have been given in our day.” Plummer said, “Not only to keep alive the legacy we have received—calling Southern Baptists to know and love the Scriptures—but to trumpet the value of God’s Word around the world.”