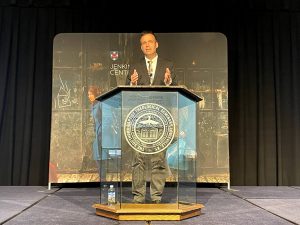 Ayman Ibrahim, professor of Islamic studies at SBTS and Director of the Jenkins Center, knows the lectures will serve to advance the gospel in the Muslim world.

“We were astonished at the turnout,” he said. “The Academic Lectures serve our vision to establish a scholarly Christian understanding of the many strands of Islam. Our mission is to equip students, pastors, and missionaries with an awareness of the Muslim world, in all of its diversity, to boldly and respectfully proclaim the gospel to our Muslim neighbors to the ends of the earth.”

To engage advanced issues, the center invites Christian experts on Islam to participate in the annual lecture series. Reynold’s specializes in Quranic studies and Muslim-Christian relations.

He addressed whether there is a “Meccan” and a “Medinan” Quran, and then discussed the similarities and dissimilarities between Allah and the God of the Christian Bible.

“In day-to-day life, Muslims emphasize and cherish Allah’s positive characteristics, such as goodness and love, but there are many other less comforting aspects of Allah testified to by the Quran,” Reynolds said.

“The Qur’an says that human beings have enough evidence through nature to know that Allah exists and should be worshiped, yet human beings have consistently failed in this. Thus, the prophets are very important in Islam—seen as Allah giving humans a merciful second chance.”

The next Jenkins Center event will host Timothy and Miriam Harris to speak on evangelism to Muslims with a session titled “The Jesus Way of Outreach to Muslim People: Grace and Truth.”

SBTS President R. Albert Mohler Jr. expressed gratitude for how the Jenkins continues to serve on the front lines of training ministers for faithful service among Muslim peoples.

“Islam was not included within the curriculum of Southern Seminary in 1859,” Mohler said. “Now, more than a century and a half after the seminary’s founding, it is impossible to imagine how a minister of the gospel can be trained and prepared for faithful service without a knowledge of Islam and the challenge it represents. For this reason, the Jenkins Center for the Christian Understanding of Islam represents a central dimension of Southern Seminary’s future.”