Manley and Dykes Named Alumni of the Year at SBC Luncheon

Two longtime pastors were named alumni of the year Wednesday afternoon at Southern Seminary’s alumni luncheon held at the annual meeting of the Southern Baptist Convention in Nashville. 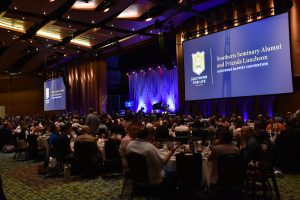 Dykes holds both a master of divinity and a doctor of ministry from the seminary. He has served as senior pastor of Green Acres Baptist Church in Tyler, Texas, since 1991 and will retire on August 31.

Dykes also did post-doctoral studies at Cambridge University, focusing on biblical art from the Renaissance period. In 2017 he received an honorary doctorate from East Texas Baptist University.

He also served as pastor of First Baptist Church of Gardendale, Alabama, for many years and was one of the first conservative trustees at SBTS who helped bring about the recovery of orthodoxy at the seminary in the 1990s.

He is the author of 19 nonfiction books including: Handling Life’s Disappointments and Do Angels Really Exist? David has also written a trilogy of action novels: The Cloudstrike Prophecy, The Jerusalem Protocol, and The Masada Proposal.

For the past eight years, Josh Manley has served as senior pastor of RAK Evangelical Church in Ras Al Khaimah, UAE.

Manley graduated from SBTS in 2011 with an MDiv again in 2013 with a ThM in New Testament. During his years at SBTS, he served as an elder at Third Avenue Baptist Church. He also served as producer of the Albert Mohler Program, the radio precursor to Mohler’s current podcast, The Briefing.

Prior to entering vocational ministry, Manley worked as an aide in the United States Senate. He is married to Jenny, and they have five children: Reeves, 13, Caroline, 11, Miriam, 9, Harper, 5, and George, 2.

Manley joined the luncheon via livestream from UAE.

President’s Report to the Messengers

In his report on SBTS to the Southern Baptist Convention Wednesday morning, Mohler told Messengers the seminary had withstood the challenges which the pandemic posed and had come out on the other side in a healthier state than before it began.

“We have more young men at SBTS training to be preachers and pastors than at any time in SBC history and more MDiv students than at any other time in Christian history,” Mohler said. “During the trial of COVID 19, we had a higher enrollment than when it began. We expect to have more than 70 different nations represented on SBTS campus when begin fall semester later this year.

“We are told that in heaven there is great rejoicing over one sinner who repents, so just imagine the rejoicing in heaven amongst those who have gone before us to see what the Lord has done in our time and in our midst and what he will do in the future.”