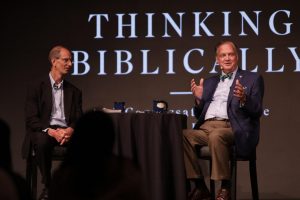 Mohler and Schreiner hold slightly different views of Hebrews’ warning passages. Both have written commentaries on the New Testament epistle. Mohler’s commentary, Exalting Jesus in Hebrews (B&H) is part of the Christ-Centered Exposition series. Schreiner’s commentary on Hebrews (Lexham) is in the Evangelical Biblical Commentary series.

Schreiner sees the five warning passages as being addressed to Christians as means God uses to cause believers to persevere in the faith. Mohler takes the historic Reformed position that the warning passages are written to those who may have had some kind of experience with Christianity, but the warnings reveal that they are not Christians. As Schreiner put it, Mohler’s view addresses people who are “almost Christians.”

Mohler said the warnings are addressed to those who, hearing these words, realize they are not true believers. Crucial to Mohler’s view is a theological section between chapters 6 and 12 that unpacks Jesus as the great high priest, the ultimate fulfillment of the Old Testament office.

“By the time you get to chapter 10, the writer of Hebrews is warning that to deny Christ is to trample him under foot, to trample under foot the Son of God,” Mohler said.

“[This issue] is personal to me in two ways. One, when I was a teenager, I was exposed to Arminian Holiness theology, and I became thoroughly convinced that if it were possible for me to lose my salvation, I would certainly do it.

“The other thing is very practical. When I arrived as a student at Southern Seminary, it was in its early waves of its confessional crisis. As a student, I had as a professor of systematic theology Dr. Dale Moody and (he) was a titanic figure on the Southern Seminary faculty of that day. . . . He was adamant about the fact that the perseverance of the saints was a false doctrine. . . . I had to face this.”

The entire discussion may be viewed here.

Mohler also participated in a TGC breakout discussion on theological triage along with Gavin Ortlund and Afshin Ziafat. Ortlund pastors First Baptist Church of Ojai, California, and is author of Finding the Right Hills to Die On: The Case for Theological Triage (Crossway/TGC). Ziafat is pastor of Providence Church in Frisco, Texas. Matt Smethurst, senior editor for The Gospel Coalition and SBTS alumnus, hosted the panel.

The discussion centered around discerning the different levels of biblical doctrine in terms of how close they sit to the heart of orthodoxy, which Mohler first outlined in a 2004 article “A Call to Theological Triage and Christian Maturity.”

The church has done theological triage from its beginning, Mohler said. Sometimes debates over doctrines are a matter of orthodoxy and heresy such as the Trinity or the deity of Christ. Other times, such debates are over more peripheral matters—things like eschatology or worship styles—matters on which good Christians may disagree without compromising the orthodox faith. Theological triage helps Christians assess how serious a given theological issue might be.

“The early church had to choose between Athanasius and Arius,” Mohler said. “And I do not believe they were making a mountain out of a molehill.”