Ministry students wanting to study theology and business now have an excellent opportunity through a brand-new credit transfer program between The Southern Baptist Theological Seminary and Union University.

“I believe in this partnership with Union and the McAfee School,” Mohler said. “I also believe a number of ministers and missionaries in the church are going to need more business knowledge. So, I look forward to this partnership.” 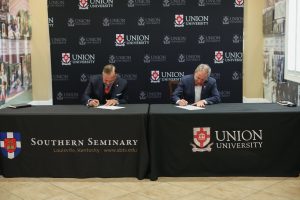 “This new agreement between Southern Seminary and Union University is the right pairing at the right time, affording students at both institutions with an extraordinary opportunity to deepen their preparation for service wherever God calls. I look forward to seeing how a growing number of men and women will find opportunities to leverage these degree programs for the sake of Christ’s kingdom.”

Union University’s McAfee School of Business is a top-tier business school, as shown by its being one of a handful of schools in the United States to achieve accreditation by the Association to Advance Collegiate Schools of Business (AACSB), so this partnership provides a unique opportunity for students at both Southern Seminary and Union University.

The 18 total transfer hours apply to MDiv tracks in the flex track programs in both Southern’s School of Theology and its Billy Graham School of Missions, Evangelism, and Ministry.

“The partnership between Southern Seminary and the oldest Southern Baptist-affiliated university is a commitment on the part of both institutions to sharing the gospel,” said Jason Garrett, dean of Union’s McAfee School of Business.

“Leaders from Tim Keller, Rick Warren, Henry Blackaby and the late Billy Graham have all stated that the next big wave of missions will come through business. This partnership gives a clear way for students to be prepared to catch this wave.”