At Mullins Lectures, Kuruvilla calls preachers to apply the Word of God rightly 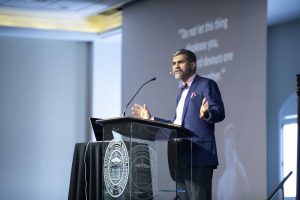 To apply the Bible rightly to a modern Christian audience, a preacher must do two things, argued Abraham Kuruvilla during the 2020 E. Y. Mullins Lectures on Christian Preaching: privilege the text and understand the thrust of the text. The lecture series, entitled “‘Look Before You Leap:’ Text to Application,” was held March 10–11 in Heritage Hall at the Southern Baptist Theological Seminary. Kuruvilla also preached during chapel on March 10.

Kuruvilla currently serves as Senior Research Professor of Preaching and Pastoral Ministries at Dallas Theological Seminary in Dallas, Texas. He has also served as interim pastor of several churches, and as president of the Evangelical Homiletics Society. He is the author of numerous works on preaching, including Privilege the Text! (Moody, 2013), A Vision for Preaching (Baker, 2015), and most recently A Manual for Preaching (Baker, 2019).

Kuruvilla delivered three lectures as part of the series. In the first of the three lectures, Kuruvilla addressed what he considers a neglected aspect of preaching.

“How do we go about this task of finding valid application from an ancient text? Throughout the two-millennia of the Church Age, this has been the striking hole in every theory of preaching: how to drive application for a modern audience from a specific passage in an ancient text,” Kuruvilla said.

Kuruvilla sought to remedy this neglect in these lectures. First, a reader must understand the meaning of the text, and second the reader must recognize what the author is doing in the text, what goal the author has in mind. Only then the reader can move to application.

During the second lecture, Kuruvilla took 1 Samuel 17 as a case study for how this method of text, thrust, application makes clear how application of the Bible can be done rightly. In battle against Goliath, David is presented by the author as the least militarily prepared person for battle, Kuruvilla argued. And that understanding of the text sheds light on what the author is seeking to reinforce for the reader.

“The theological thrust deals with an abiding trust in God, in times of battling for God, manifested in the abandonment of reliance on worldly stature, resources, and experiences,” Kuruvilla said.

“The Christian engages in battle for the King. The story tells us God doesn’t need the one with the most toys to win his battles. He doesn’t need the greatest stature, the vastest resources, the most experience. God’s people, instead, develop the stature of a heart for God. They exercise faith to engage enemies in the name of God — the ultimate resource. And they go into battle with the past experience of the power and deliverance of God. All of this is obtained by a theological exegesis that privileges the text, carefully looking at the text for what the author is doing.”

Concrete application that flows from the text and theological thrust is necessary for anyone who would teach the Bible, Kuruvilla argued in his third lecture. The responsibility falls on the preacher to demonstrate how the passage, or pericope, should change the hearers' daily lives, not only to explain what the passage means theologically.

“The idea is to get ourselves and our listeners started on the life-long journey of aligning ourselves to the pericope.”

At the heart of this method is what Kuruvilla called a “Christo-iconic” understanding of Scripture. The reader grows in conformity to the image of Christ, as the reader sees the unfolding revelation of the person and work Christ in the Bible, Kuruvilla argued.

Kuruvilla received his master of theology from Dallas Theological Seminary in 2002 and his doctor of philosophy from the University of Aberdeen in 2007. He is also a trained medical doctor, with a doctor of philosophy in immunology from Baylor College of Medicine, and he maintains an active clinical schedule as a dermatologist.

The Mullins Lectures are one of the nation’s oldest continuous lectureships in homiletics. The lectures honor the life and ministry of the seminary’s fourth president, E. Y. Mullins, and exist to show the model and methodology for expository preaching.

Audio and video of the lectures will be available online at equip.sbts.edu.