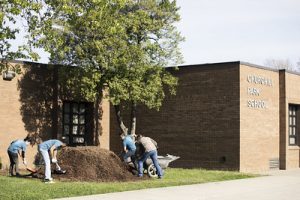 On Saturday March 7, the Southern Baptist Theological Seminary and Boyce College community will work throughout Louisville for a day of service. For the last seven years, in cooperation with the mayor’s office, the seminary and college community has served Louisville to commemorate the great flood of 1937.

Eighty-three years ago, the seminary lent a helping hand to the city, offering food, shelter, and relief from the effects of the flood. This year, the seminary will uphold its tradition by serving the Jefferson County Public Schools.

It is more than just a tradition, though. The 1937 project is an event this community has come to love.

“As followers of Christ we are called to serve wherever we may find ourselves,” said Dustin Bruce, the dean of Boyce College. “The 1937 Project is a yearly reminder that as members of the Boyce College and Southern Seminary community, we are commanded to love our neighbors in Louisville through word and deed.”

The students at Boyce College express anticipation for the 1937 Project. After serving, some call it their “favorite event of the spring semester.”

Lauren Regier, a junior in the business administration program at Boyce, has served on the 1937 Project for two years in a row. She decided to sign up during her freshman year because the history behind the event intrigued her. After that first year, she came to love serving with other students.

“It was like a full church workday,” said Regier. “[The project site] was a big, old school; there was sunlight streaming in, music playing; everyone was painting walls, cleaning everything, and people wouldn’t stop working. We had to [remind ourselves] to take a break.”

Regier’s first year of service is still her favorite. She signed up and was put on a team of new people. Not only was she able to build relationships with people she would not otherwise have met, she was exposed to organizations like Refuge International. Her time with the 1937 Project made serving the Lord that much more tangible, Regier said.

Emily Byrd came to Boyce in Spring 2017, heard about the project’s history, and looked forward to being part of it. She appreciated the opportunity to serve with members of her church and to do the work of the gospel.

“We were working at a school,” Byrd said, “and the principal was so overjoyed  by us being there." Byrd did not know if the principal was a Christian, but was confident that the day of service “was incredible for him to see.”

Byrd’s project her second year was mulching the area around a Jefferson County Public School. She enjoyed seeing how her team’s work was helping the community.

The first year she served on the project Byrd joined a team picking up trash on the streets. She does not remember much about her actual service, except that it was wet and cold, but she does remember growing closer to members of her church and being able to rejoice in the Lord through service.

“Everyone was in such good spirits. We all gathered in a sheltered place afterward and had fellowship over a meal and got to discuss where we had served. I enjoy[ed] that,” said Byrd.

Regier and Byrd both emphasized that serving with the 1937 Project helped them (and helps others) be a light in Louisville — right here where God has placed them for the time being.

The 1937 Project is not a mandatory event for students. Even still, Regier and Byrd encourage students already at Boyce or just entering to sign up at least once.

“It helps you understand that the work of ministry going around Louisville is bigger than your church and Southern Seminary,” Regier said. “It lets you see that there is light going out to the city.”