Garrett, the John R. Sampey Professor of Old Testament Interpretation and Professor of Biblical Theology, argued that these “allusive patterns” consist of references to previous passages of Scripture that help make clear what the biblical author wants the reader to learn. 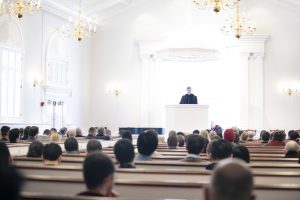 Garrett took as his theme 1 Kings 19, in which the prophet Elijah fled to Mount Sinai to escape from the wrath of Jezebel, leading to Elijah’s complaint against the faithlessness of Israel. Though Elijah had just witnessed fire come down from heaven and consume the burnt offering, reaffirming the Lord as the true God, Elijah was despondent over the Israelite’s faithlessness when he reached Sinai, and he sought to prosecute them before God. The author of 1 Kings includes details that remind the reader of Moses’ intercession for Israel while he was on Mount Sinai in Exodus 19, Garrett argued.

“Moses is the paradigm,” Garrett said. “His intercession demonstrates that, for all his frustration and disappointment, the true prophet of God must plead for Yahweh’s people and not against them. Elijah, in this regard, failed to live up to the paradigm.”

“The essential message of the Moses-Elijah parallel in 1 Kings 19 is unambiguous. The prophet of God should intercede for sinners and not seek their destruction.”

Later biblical authors connect the theme of the ideal prophet from Moses at Sinai in Exodus 19 and later Elijah at Sinai in 1 Kings 19 to their own writings, Garrett argued. This is most clear in the book of Jonah. Like Elijah, Jonah failed to live up to the standard of an ideal prophet established in the example of Moses in Exodus 19.

“Jonah’s yearning to see Nineveh destroyed has an obvious parallel in Elijah’s prosecution of Israel. Therefore, by means of the allusions to Moses and Elijah, the book of Jonah extends the reader’s understanding of the compassion of Yahweh and the role of the prophet. Jonah rejected Moses’ model of intercessor and embraced Elijah’s model of prosecutor.”

Though Elijah and Jonah serve as negative examples, these passages help illuminate passages in the New Testament. The theme of the true prophet is taken up by the Gospel writers, who link the narratives of Moses, Elijah, and Jonah, and demonstrate how Jesus is the fulfillment of the ideal prophet envisioned throughout the Old Testament.

“When the account of the transfiguration of Jesus alludes to the complex of stories involving, Moses, Elijah, and Jonah, it does not saddle those passages with alien ideals but taps into an already existing allusive pattern. And, the allusions are not casual literary parallels, curiosities of no real significance. The allusions imply that Jesus is bringing the theological ideal of the old testament prophet to its culmination,” Garrett said.

Gospel writers point the reader to the heart of a passage through the use of allusions to the Old Testament. These New Testament allusions provide the final resolution, denouement, to Old Testament themes, Garrett argued. Though the transfiguration is deeply meaningful as a stand-alone passage, Garrett said, when seen from the perspective of the biblical storyline, the significance of the transfiguration of Jesus is made even more clear.

“In the New Testament, the narrative of the transfiguration of Jesus draws upon the Moses-Elijah-Jonah pattern,” Garrett said. “But what is the significance of Jesus’ transfiguration? We might simply answer that Jesus was glorified and so he was. But the allusions imply that the glory here is something specific: It is the same as the glory that made Moses’ face shine, it is the quiet voice that rebuked Elijah. It is the revelation that God is gracious and compassionate.”

“The servant of Yahweh seeks forgiveness of sinners and not their destruction, thus the light that shone from Jesus revealed him to be the great intercessor, filled with the same grace that was reflected in Moses’ shining face. The fundamental issue in the divine encounters of Moses, Elijah, and Jonah is how the servant of God will respond to sinners.”

Garrett has served on faculty at Southern Seminary for sixteen years, and his published works include Song of Songs, in the Word Biblical Commentary series; A Modern Grammar for Classical Hebrew; Angels and the New Spirituality; Authority and Interpretation; and Hosea and Joel in the New American Commentary series. He also serves as the general editor for The Archaeology Study Bible from Zondervan Press.

Garrett earned his master of divinity from Trinity Evangelical Divinity School, in Deerfield, Illinois, and his doctor of philosophy from Baylor University, in Waco, Texas.

Audio and video of the lectures will be available soon on Southern Equip.