‘Leadership is character,’ says Bingham at Julius B. Gay lectures

A true leader does not just manage people effectively, but also models a godly life for others, said D. Jeffrey Bingham during the Julius B. Gay lectureship at The Southern Baptist Theological Seminary, February 11-12. Bingham, dean of the school of theology and professor of theology at Southwestern Baptist Theological Seminary in Ft. Worth, Texas, delivered three lectures titled “The Soul of a Leader: Acuity from Antiquity” at Heritage Hall. In these addresses, Bingham explored what modern leaders can learn from the thinkers of the past, including the church fathers.

In today’s culture, leadership is often associated with being an effective administrator — being someone who can manage a team to accomplish a common goal. Though good administration is not bad, Bingham said, the heart of leadership must begin with a leader’s integrity. 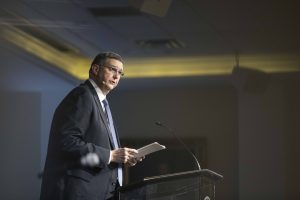 “The essence of a leader is not managerial skills, certain habits, or elements of a personality, but rather his or her character — that the leader is a virtuous person,” Bingham said. “A corporate culture should not guide an ecclesiological culture.”

Bingham earned his Master of Theology and Doctor of Philosophy degrees from Dallas Theological Seminary in Dallas, Texas. He has significant academic experience, having served in academic and administrative roles at Criswell College, Dallas Theological Seminary, and Wheaton College. He is also the former president of the North American Patristic Society. He has written numerous scholarly volumes, including Irenaeus' Use of Matthew's Gospel in Adversus Haereses, published in 1998.

A biblical view of leadership

Bingham was appointed the interim president of Southwestern Seminary in May 2018, and he acknowledged that taking on that position encouraged him to reflect deeply for the first time on the nature of distinctly Christian leadership.

“I was flooded with internal questions about the nature of distinctly Christian executive leadership,” Bingham said. “It was there, for the first time in my life, that I began to think deeply in an urgent, almost panicked way about the heart and soul of leadership. I had been a seminary department and divisional chair, a college associate dean, a dean of a seminary school, but this was something remarkably different.”

In his lectures, Bingham proposed a distinctly Christian view of leadership. Corporate leadership literature has dominated the conversation about leadership for the last 80 years, Bingham said. Leadership sections of bookstores are filled with books on effective management, but few of them focus on personal character.

“These types of topics have controlled the discussion in the past years,” Bingham said. “We cannot overemphasize the influence that the secular corporate culture had upon this literature. Many are unaware, for instance, it was Robert K. Greenleaf, an AT&T executive, who coined the term ‘servant-leader.’”

“I am asking for a new focus on the essence of leadership, a new discourse about distinctively Christian leadership — a pivot, in short, from leadership to leader, from habits to character, from followers to gain to being virtuous,” Bingham said. “When we put the adjective ‘Christian’ before the noun ‘leader,’ everything changes. We are not ultimately interested in a secular, Buddhist, or Muslim model of leadership. It is a Christian model that we seek”

Mere managerial skills, Bingham argued, are insufficient for the Christian leader. The formation of personal character better prepares the leader for what will be required of him, he said.

“To become authentic leaders, people must adopt flexible styles that fit the situation and cater to the capabilities of their teammates,” Bingham said. “At times, leaders are coaches and mentors, inspiring others and empowering their teammates to lead through the most important tasks without a great deal of supervision. At other times, authentic leaders must make very difficult decisions, terminating people and going against the will of the majority as required to meet the situational imperatives. These difficult actions can be taken while still retaining one’s authenticity.”

Wisdom from the past

As a scholar of the early church, Bingham turned to the theologians who lived in the 400 years after the resurrection of Christ. The New Testament authors and the church fathers envisioned leadership marked by godly virtue, Bingham said.

“The bishop, then, must be without reproach. … There is no blessedness in simply holding the office [of pastor]. The blessedness is found in possessing the virtues that qualify one for the office,” Bingham said, summarizing Jerome’s understanding of pastoral leadership.

Gregory of Nazianus, in his oration on the character of the pastoral office, argued that godliness is the first criterion by which a prospective minister should be judged.

“[Gregory] criticizes priests for lack of preparation, wrong motives, and reprehensible character, for presuming to lead others in the pious life, while they themselves have not been sanctified,” Bingham said. “Therefore, leaders must be carefully prepared. Central to such preparation is a long and deep immersion in scripture. Thorough biblical and spiritual training would require years of preparation, and could not be rushed. Little wonder, then, that Gregory’s ideal minister might well be a man of grey hair and advanced age. Until a prospective priest has, through long philosophical training, mastered his passions, purified his understanding, and sufficiently passed others in nearness to God, it would be dangerous to entrust him with the direction of souls.”

Bingham focused on two specific characteristics that highlight the leader’s right character: generosity and hospitality. These characteristics are evidence of servant heartedness.

A leader should be able to renounce his earthly possessions and leverage his resources for the good of Christ’s kingdom. Jesus regularly reminded religious authorities to forgo material prosperity: “Take care, and be on your guard against all covetousness, for one's life does not consist in the abundance of his possessions” (Luke 12:15).

Hospitality, similarly, should distinguish the Christian leader from the non-Christian one. Evangelicals are often drawn to the leader as teacher, Bingham said. The ability to teach is listed in the qualifications Paul sets out in 1 Timothy 3 and Titus 1. But teaching is merely one of many characteristics expected of a minister, including hospitality. Paul expects Christian leaders to not only be able to teach, but to welcome other Christians into their home and to live the Christian life in front of their flock, according to Bingham.

“The elder is to be just as concerned with hospitality as he is to be about his teaching,” he said. “The leader is the chief host. The leader is to exemplify hospitable love before the community.

“To be hospitable is to practice justice, generosity, service, humility, loneliness, meekness, especially to the sick, the poor, the stranger. Hosts honor others, protect others, show precedence to others. Hospitality is a lifestyle that refuses to be self-indulgent, hedonistic, or given to self gratification.”

The Julius B. Gay lectureship is among the seminary’s most prestigious and oldest lectures. It was endowed in 1894 by William Gay in Montgomery, Alabama, to honor his late father, Julius Brown Gay.

Audio and video of the lectures will be available soon on Southern Equip.