Michael O’Neill has been appointed vice president for accounting and finance at The Southern Baptist Theological Seminary. O’Neill has extensive experience in the field of finance and has worked at Southern Seminary for more than a decade.

Prior to this announcement, O’Neill, who is a certified public accountant and certified fraud examiner for the state of Kentucky, served as assistant vice president for accounting and controller for the last 13 years, supervising all accounting functions for the seminary.

In that role, he oversaw perfect budget audits for eight of the previous nine years. He began his new VP role in December. 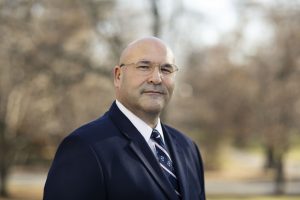 “Michael O’Neill is a man of amazing ability and demonstrated conviction,” Mohler said in a statement. “He is already a key member of the Southern Seminary leadership team, and I really look forward to his leadership in this new position. Throughout the years, I have learned that Michael O’Neill is a man to be trusted, relied upon, and listened to. For his service, I am very thankful and his assumption of these new responsibilities. It is a great day for Southern Seminary.”

As vice president for accounting and finance, O’Neill oversees the day-to-day financial operation of the seminary as well as the long-term management of institutional resources.

“I love Southern, and I am personally committed to Southern’s mission,” O’Neill said. “The Lord has blessed me with the opportunity to use my training and experience to serve behind the scenes to enable the best faculty in the world to fulfill their calling to train, educate, and prepare ministers of the gospel for more faithful service.”

Before starting his master of divinity degree program at Southern Seminary in 2006, O’Neill served as a bi-vocational church planter in Indianapolis, working in a number of accounting roles at secular and Christian organizations.

O’Neill became a believer at a young age, he said, and was drawn to pastoral ministry through evangelistic opportunities with Mormons and Jehovah’s Witnesses. These interactions, O’Neill says, encouraged him to pursue greater understanding of apologetics and Christian education, eventually leading him to Southern Seminary.

“Michael O’Neill is one of the unsung heroes of Southern Seminary,” said Craig Parker, senior vice president of institutional administration. “He is the most outstanding accounting professional I have ever known, but that is not the most important thing you need to know about Michael.

“He is a man who loves the Lord Jesus, loves the church, and is completely committed to the students and faculty of Southern Seminary. Michael works tirelessly in service to the seminary, and though many on the campus might not ever interact directly with Michael, his exceptional service is a blessing to each and every one of us. It is a tremendous joy to have the opportunity to serve alongside a man of Michael’s skill, character, and devotion to Southern’s mission.”

O’Neill has spent the last thirteen years dedicated to the financial health of Southern, and he sees this new role as an extension of that service.

“The Lord used my enrollment at Southern to open the door for me to join the staff of the seminary and use my education, experience, and God-given skills to serve the Lord in a way that I had not previously even considered,” O’Neill said. “Although I came originally as a student, I believe the real reason that the Lord brought my family and I to Louisville was to serve him by serving the seminary, its students, and the churches of the Southern Baptist Convention as the seminary’s controller.”

O’Neill earned his bachelor of science in business with a concentration in accounting from Indiana University in 1987. O’Neill and his wife, Leia, have been married for 36 years and have three daughters.