Graduates of The Southern Baptist Theological Seminary are heralds of the good news of salvation through the forgiveness of sins, said R. Albert Mohler Jr., president of Southern Seminary in Louisville, Kentucky, at the school’s 224th commencement exercises, December 13.

During the ceremony in the historic Alumni Memorial Chapel, 150 master’s and doctoral students were present to receive their degrees on Friday as members of a 208-person graduating class. These graduates are sent out as stewards of the knowledge of salvation into a world that desperately needs that knowledge, Mohler said in his commencement address. 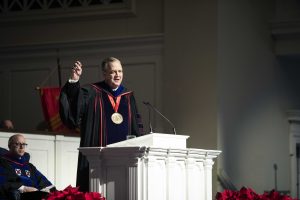 “We are sending out these graduates to go out into the nations and out into the pulpits and into the churches, and to speak to everyone everywhere in order to communicate the knowledge of salvation,” Mohler said. “But it’s not just [a message of salvation that says], ‘This is good news; God loves you.’ That’s true, but it’s infinitely better than that. [The message is] that ‘you are a sinner, but God shows his mercy to you in Christ in whom your sins can be forgiven.’”

Although most sermons delivered around Christmas rightly focus on the birth of Christ, this address — titled “To Give Light to Those Who Sit in Darkness” based on Luke 1:67-79 — demonstrated the powerful lesson ministers of the gospel can learn from the birth of John the Baptist. They, like the great prophet who “prepared the way of the Lord” (Mark 1:3), testify to the coming Christ through their lives and ministries, according to Mohler. Just as John the Baptist warned his generation to flee the wrath to come, the graduates of Southern Seminary going into ministry will bring light to those in darkness.

“You get to take the light to those who are even now sitting in darkness,” Mohler said. “But they’re not merely sitting in darkness; they’re sitting in the shadow of death. And your task, following the example of John, is to guide their feet into the way of peace.”

While for many, the Christmas story begins with the angel who visited the virgin Mary, the Gospel of Luke actually begins with the story of a different child — the conception and birth of John the Baptist. In that story, Zechariah and his wife, Elizabeth, were old and barren. When Zechariah went into the temple to burn incense, an angel appeared to him and told him his wife would conceive and bear a son, and that son would have a unique mission. When Zechariah doubted the angel’s message, the angel inflicted him with muteness, which would last for his wife’s pregnancy.

When Zechariah finally speaks again after nine months of silence, the first thing he says takes the form of a prophetic song, often called the Canticle of Zechariah, Mohler said. He was filled with the Holy Spirit and prophesied about his son, who would not only “prepare the way” for Christ (Luke 1:76) but also “give his people the knowledge of salvation through the forgiveness of their sins” (Luke 1:77).

“This is no mere newborn boy,” Mohler said. “This is a miraculous birth that points to a sovereign mission that God has given by his own authority — a particular mission that is the fulfillment in itself of biblical prophecy.”

His mission, Mohler said, is similar to the one passed down to ministers of the gospel today.

“Why are we happy about these graduates? What gives us such joy on this occasion? It’s because what was here assigned to John is what, by the call of God, is now assigned to them. They are to give knowledge of salvation to God’s people in the forgiveness of their sins,” he said.

During commencement, Mohler also presented the Josephine S. and James L. Baggott Outstanding Graduate Award to Caleb T. Shaw, a master of divinity graduate from Glasgow, Kentucky. The award is named after the Baggott family, who established a fund in 1980 to recognize the outstanding graduate of each graduating class. The recipient is voted upon by the members of the graduating class based on outstanding leadership, exemplary character, and sound scholarship. The recipient receives an award from Lifeway Christian Bookstores and participates in the graduation procession by carrying the seminary standard.

Mohler’s entire address, will soon be available in audio and video at Southern Equip.