As they did so, they extolled Schreiner’s prodigious scholarship and godly character to a room filled with people who have benefitted from both during his 37 years of teaching ministry.

The volume, God’s Glory Revealed in Christ: Essays on Biblical Theology in Honor of Thomas R. Schreiner, was published by B&H Academic and edited by Denny Burk, James M. Hamilton Jr., and Brian Vickers — each of whom studied under Schreiner as doctoral students at Southern Seminary. “I’m tremendously grateful for his preaching in the church, the scholarly writing … and his humble Christlikeness,” said Hamilton during the luncheon. 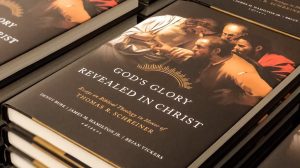 All three men were on stage at the luncheon to officially present the festschrift to Schreiner. During the event, friends, colleagues, and family spoke at length about Schreiner’s influence on their lives and ministries.

Schreiner has taught at Southern Seminary since 1997 and has written or edited more than 25 books, in addition to contributing chapters to more than 20 volumes. His most significant works include The Law and Its Fulfillment, The King in His Beauty: A Biblical Theology of the Old and New Testaments, New Testament Theology: Magnifying God in Christ, and his exegetical commentary on the book of Romans, which was published in 1998 and reprinted as a second edition in 2018. He previously taught at Bethel Theological Seminary for 11 years and Azusa Pacific University before that.

Bruce Ware, who has been friends with Schreiner since they were seminary classmates at Western Conservative Baptist Seminary, said his deep respect and admiration for Schreiner has only grown in the decades he has known him.

“There are some people who, the more you get to know them, the more things you see that make you wonder about their character or their conduct. It is just the opposite with Tom,” Ware said.

Schreiner has always challenged himself in his studies, Ware said. A “completionist” by nature, Schreiner would finish all his assignments for the semester before midterm exams, which freed him up to read widely the rest of the term.

Despite the fact that Schreiner is world-renowned as a New Testament scholar with expert-level facility in Koine Greek, Schreiner earned his master of theology degree (Th.M.) in Hebrew because he wanted to make sure his grasp of the language remained strong, according to Ware. Beyond his academic accomplishments, Schreiner’s friendship has sustained Ware during difficult times in his life and ministry.

“I have gotten to know this man really well. I know him; I know no one else in the way I know Tom in terms of human relationships apart from my wife,” he said. “And I have only grown in my respect for this man: for the life he lives, his discipline, his love for the Lord and the church, and his joy in the Lord. He is a dear friend and a wonderful Christian man.”

Patrick Schreiner, assistant professor of New Testament literature and language at Western Seminary’s Portland campus in Portland, Oregon, and Schreiner’s second son, spoke about his father during the luncheon. He praised his father, Tom, and his mother, Diane, for their godly parenting, which exemplified kindness and generosity. Patrick also said the kindness for which his father is publicly known is also reflected in his closest personal relationships.

“What I’ve seen of my dad in public is also true in private,” Patrick said. “If you wonder whether this man you see in public is the same as he is in private, my answer to you would be ‘yes.’ And he would admit it is only by the grace of God.”

Trevin Wax, director for Bibles and reference at LifeWay Christian Resources and a graduate of Southern Seminary, has worked with Schreiner on various projects in his role for LifeWay.  Wax noted Schreiner’s valuable wisdom regarding critical decisions that have had to be made in both publishing and Bible translation. Whatever the problem, Schreiner has always taken Wax’s call and offered valuable insight.

“When I think about the kinds of scholars that I most like to read, I think of scholars who will make me love the Bible more,” Wax said. “There’s a difference between a commentary that explains the biblical text and commentaries that, once you read them, make you want to get into the biblical text. Dr. Schreiner has always been that kind of biblical scholar [who makes me want to get into the text].”

In his concluding comments from the luncheon, Schreiner said he was “overwhelmed” by the honor and expressed his thankfulness to God and his family and friends.

The book features chapter-length contributions on the topic of biblical theology from many scholars and pastors who are personal friends with Schreiner, including John Piper, D.A. Carson, Robert Yarbrough, Mark Seifrid, Simon Gathercole, and Russell Moore. R. Albert Mohler Jr., president of Southern Seminary since 1993, wrote the foreword to the volume.

“Where Professor Tom Schreiner is found, faithful teaching is found,” wrote Mohler in the Foreword. “One of the greatest privileges of my life is to teach and serve among some of the leading Christian scholars of our day, and Tom Schreiner is in the highest rank among them. He is the very model of a Christian teacher and scholar.”