The Southern Baptist Theological Seminary would not exist without the partnership of the Kentucky Baptist Convention, R. Albert Mohler Jr. told 160 alumni and friends of Southern Seminary at the school’s luncheon during the KBC annual meetings, November 12. The group met in a full-capacity room at Malone’s Prime Events and Receptions in Lexington, Kentucky, during a break in KBC proceedings. 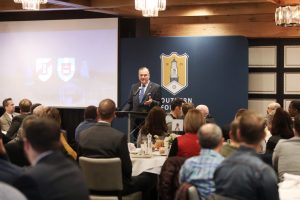 Similarly, the Kentucky Baptist Convention has provided a “fertile ground” for Southern Seminary to thrive, according to Mohler.

“Southern Seminary as we know it today would not be what it is without Kentucky Baptists,” he said.

Since Mohler became president of the institution in 1993, Southern Seminary has graduated more than 12,000 students. This is both a great privilege and a tremendous responsibility, according to Mohler. Just as the seminary is indebted to its past, it also is responsible for continuing the school’s legacy of faithfulness.

Mohler encouraged leaders of Kentucky Baptist churches to continue to send students to Southern Seminary so they might join an “army of Christ serving to the glory of God.” While it is rare in the 21st century United States to see a theological institution thrive, it is not an exception in the history of the Christian church. It is the rule, as God continues to strengthen his church by calling future pastors, missionaries, and leaders into ministry training.

“One day we will have an alumni reunion that will make this one look pale by comparison,” Mohler said. “Then we will have a much better understanding of how the Lord used graduates of the seminary and used you — those who came before us and those who went after us. We’re going to have a much better view. But until then, we have a lot of work to do.”

Mohler also expressed a short greeting to the gathered assembly of the Kentucky Baptist Convention that morning, noting that the seminary has over 5,000 students registered from more than 70 different countries around the world. He thanked the KBC for their continued support of Southern Seminary, and said he hoped the graduates of the school would continue to bless the churches of the state convention.

“We do not take for granted that God, in his mercy and providence, brought Southern Seminary to Kentucky,” he said. “It has been my determination that, because of Southern Seminary, Kentucky Baptists would be stronger and more blessed.”