Margaret Thatcher, the British stateswoman who served as prime minister of the United Kingdom from 1979–1990, was an elegant woman who embodied essential leadership principles from which all leaders can learn, said R. Albert Mohler Jr. at today’s Leadership Briefing, November 5. The event was hosted by The Southern Baptist Theological Seminary and held in a packed Heritage Hall.

Mohler, who is president of Southern Seminary, said he has long admired Thatcher, who was a lifelong defender of liberty. The 20th century was a breeding ground for leaders both good and bad, but the thing that set good leaders apart was a commitment to decisive opposition to evil, Mohler said. This commitment came from Thatcher’s unshakeable commitment to morality as the center of a well-functioning state. 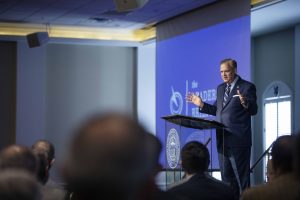 “She was a moralist,” Mohler said. “Margaret Thatcher believed in a central conservative axiom: that there has to be a very clear and unquestioned moral center — a moral character to the people — if liberty is to be possible.”

Born Margaret Roberts in 1925 in a very small town, Thatcher became Britain’s Conservative Party leader in 1975 and then was elected prime minister in 1979. Her father was a lay Methodist preacher who also worked as an import grocer, meaning she grew up surrounded by the goods of the British Empire, Mohler said. She observed the whole community as they came through her father’s store, and got a close-up view of the people of the British Empire and what it meant to be English — a commitment to community, neighborhoods, and strong moral values that defined social neighborly obligations, according to Mohler.

“Margaret Thatcher was not the product of growing up in London or Birmingham or Manchester,” he said. “She was not born near the corridors of power, but she was born destined for power.”

Thatcher, called the “Iron Lady” by a Soviet journalist, embodied a tough, uncompromising leadership style that was desperately needed in the United Kingdom during her time. In many ways, she was a Victorian-era leader in a morally compromised time, Mohler said. She also expressed deep Christian convictions during her life, telling the Church of Scotland in a famous speech that Christianity was “about spiritual redemption, not social reform.”

“Had Margaret Thatcher been born in 1825, we would not know of her because it would have been inconceivable in the 19th century that a woman would have served as the prime minister of Great Britain,” Mohler said. “And I daresay, if she were to be born in 2025, she would probably have no place in British politics because her ideas would be considered so absolutely antiquated. That would not offend her because she would argue that the abandonment of those principles is what has led to political chaos today.”

Throughout her career, Thatcher defended conservative principles such as privatization of the British economy, limits to the growth of the government, and the confronting of unions. Along with American president Ronald Reagan and Pope John Paul II, Thatcher was an avowed opponent of socialism and refused to accept Soviet Communism as a viable governmental structure.

She fought against the widespread support during her lifetime for turning the United Kingdom into a welfare state and enacted her essentially conservative and moral values in order to create a strong and honorable population.

Toward the end of her political career, as she declined in popularity, Thatcher’s opponents began to wonder if she might begin to loosen on some of her more conservative ideals. But since she was a convictional leader, Thatcher refused to turn from her most deeply held beliefs.

Audio of the Leadership Briefing will soon be available through the Southern Equip page.