There are many important aspects to being a faithful preacher of the Word of God: preaching the text faithfully, leading the local church effectively, and discipling and encouraging believers under one’s care. But one of the most critical features of godly church leadership exists under the surface of each pastor’s ministry, and if it is not present, it could rot the pastor from the inside-out.

A cohort of evangelical preachers urged 500 attendees at the 2019 Expositors Summit to conduct their lives and ministries above reproach. Purity sets apart ministers of the Word of God, they said, and adorns the gospel they preach to the people of God. The main speakers at the Expositors Summit were Alistair Begg, R. Albert Mohler Jr., Hershael York, Charlie Dates, and Bob Russell, and they spoke in Alumni Chapel at The Southern Baptist Theological Seminary on October 29-31.

The role of a pastor is largely to provide an example for God’s people in conduct, godliness, and personal holiness said Alistair Begg, senior pastor of Parkside Church in Cleveland, Ohio. According to Begg, the New Testament prioritizes the pastor’s character as much as — if not more than — a man’s gifting for preaching and teaching. This personal character is formed by years of consistent obedience, not blips of momentary faithfulness, he said. 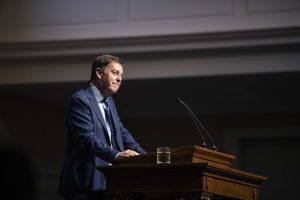 “The example that we are to provide for our people is not to be intermittent [in our holiness],” Begg said. “It’s not to be ‘start and stop.’ It’s not to be a burst of enthusiasm followed by periods of inertia. The example is to be maintained all of our lives.”

There is nothing worse than witnessing the collapse of a ministry because of moral failure, according to Begg. It is especially tragic when that life or ministry has taken a lifetime to build, only to be torn down by personal pride.

“Underlying every pastoral collapse about which I know anything on an intimate level is the ugliness of pride. [They tell themselves] ‘somehow this doesn’t apply to me’ … ‘I have the matter of purity under control.’ When in actual fact, God searches and knows our hearts.”

During the week of the Expositors Summit, Begg also appeared on the Pastor Well podcast, hosted by Hershael York, dean of the School of Theology at Southern Seminary, and spoke in chapel on October 31.

While Christians and Christian ministers should whole-heartedly pursue holiness, they should do so with the awareness that they will never fully achieve it on this side of the kingdom, said Mohler during his address. This means the pursuit of holiness must always be characterized by a deep “eschatological” hope, according to Mohler. 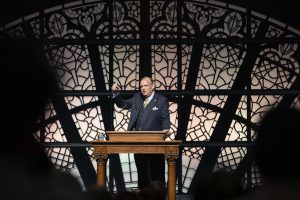 “We are not to expect the fullness of anything in this life,” Mohler said. “And by the way, that means we aren’t going to experience the fullness of holiness in this life, but we have set our minds fully on the grace of God that will be revealed to us at the revelation of Jesus Christ.”

Hershael W. York, dean of the School of Theology and Victor and Louise Lester Professor of Christian Preaching at Southern Seminary, said the pastor’s resolute endurance before temptation comes from his awareness of the character of God.

“God says that he hates, not some sin but all sin, and that any sin and every sin cost the life of his son, Jesus,” York said. “If you excuse sin … then ultimately, you demean the atonement of sin. If you say sin is no big deal, than neither is the sacrifice of Jesus Christ.”

Before the Expositor’s Summit, York also led a pre-conference about pastoral ministry on Monday, October 28, in Heritage Hall on the Southern Seminary campus.

Also speaking during the Expositors Summit were Charlie Dates, senior pastor of Progressive Bible Church in Chicago, Illinois, and Bob Russell, formerly the pastor of Southeast Christian Church in Louisville, Kentucky, and now the leader of Bob Russell Ministries. Dates opened both days of the plenary sessions and also preached in Southern Seminary chapel on Tuesday morning.

All videos of the plenary sessions of the Expositors Summit will soon be available at Southern Equip.